American teenager Missy Franklin, heralding the new generation of US swimmers, clinched the backstroke double at the London Olympics with a 200m world record on Friday. 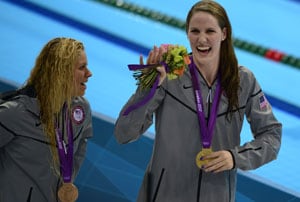 American teenager Missy Franklin, heralding the new generation of US swimmers, clinched the backstroke double at the London Olympics with a 200m world record on Friday.

The bubbly 17-year-old American clocked 2min 04.06secs to better the previous world mark of 2:04.81, held by Kirsty Coventry of Zimbabwe.

It was Franklin's third gold medal of the Games after her win in the 100m backstroke and the 4x200m freestyle relay.

The US swimming sensation had dedicated her wins at the Olympics to lifting the spirits of her traumatised Colorado home town of Aurora where 12 people were killed and 58 others injured in a shooting massacre at a cinema on July 20.

Franklin, who won five medals including three golds at last year's Shanghai world championships, has been one of the swimmers of the London meet.

"I think there are so many members of this year's US team and the youth team coming up, who can carry on the incredible generation we have had before us," she said.

"It is going to be extremely hard, because they have left unbelieveable footprints in swimming history.

"It will help us all come up to that expectation and hopefully help us keep up that swimming legend."

Franklin is expected to swim the backstroke leg for America in the 4x100m medley relay on Saturday's final day which will make her the first US woman to swim seven events at one Olympics.

"I have learnt so much, I had a few times when it is hard not to sit down and think 'I am exhausted'", she said.

"But those are the times when it is most important to get up and keep the smile on your face and think that so many people would kill to be where I am now or to have this opportunity.

"You have to do this with as much passion and energy as you can, I think there are so many ways I can get better. But I am proud of keeping my excitement the whole eight days.

Franklin went out hard and set a cracking pace winning clearly by 1.86sec.

"I knew I had taken it out pretty hard, because the last 25 hurt so bad," she said.

"I am pushing myself past the limit and it means the world to me, it just happened to get me a world record and a gold medal.

"I think it is awesome so many swimmers have been able to come out here and break world records when a lot of people didn't think we'd be able to," she said.

"I have had the time of my life, I had so much fun in the ready (call) room."

Yet again Franklin proved she was the world's dominant female backstroker after she showed her tenacity and durability to win the 100m final just 13 minutes after competing in the 200m freestyle semi-finals last Monday.

"It feels absolutely amazing, I can't think of a better way to end my individual events," she said.

"That is my favourite one (200m), I wanted to get out there and have fun and that's what I did.

Franklin said her plan was to get to the front and dictate the pace.

"I knew I had to get out there, it was an incredible field I was up against in that last 25 I knew I was gving it everything I had because I couldn't feel my arms and legs," she said.

"I was just trying to get my hand to the wall as fast as I could.

Anastasia Zueva of Russia won the silver in 2:05.92 with American Elizabeth Beisel taking the bronze in 2:06.55.

Franklin said the partying starts after her remaining event in the medley relay on Saturday night.