Sun Yang of China smashed his own world record in racing away to win the men's 1500-metres freestyle gold medal at the Olympics on Saturday. 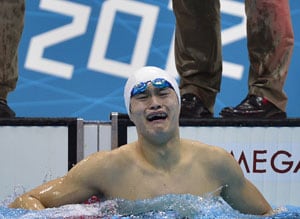 Sun Yang of China smashed his own world record in racing away to win the men's 1500-metres freestyle gold medal at the Olympics on Saturday.

Ryan Cochrane of Canada took the silver medal in 14:39.63, with defending champion Oussama Mellouli of Tunisia taking bronze in 14:40.31.

"I couldn't hear the judge very well because of the noise in the venue, I thought I was going to be disqualified (after the false start)," Sun said.

"I didn't expect the false start and I was very worried about being disqualified."

FINA said that Mellouli has queried the start, but the Tunisians had accepted the referee's account of the start and would not appeal his decision.

No other country had queried the start, a FINA spokesman said.

Great Britain Daniel Fogg, who finished eighth in the race, said he had no problem with Sun re-taking his place on the starting blocks.

"It was held for a long time. I was told to stand. I didn't realise he (Sun) had gone in until I got off the block," Fogg said.

"It just was a faulty start rather than a false start. I have no problem with him going again."

It was Sun's second gold medal of the meet after he became the first Chinese man to win Olympic swimming gold with his 400m freestyle victory.

Sun dominated his rivals and had 8.61secs to spare over Cochrane at the finish.

Comments
Topics mentioned in this article
Olympics 2012 Swimming
Get the latest updates on ICC T20 Worldcup 2022 and CWG 2022 check out the Schedule, Live Score and Medals Tally. Like us on Facebook or follow us on Twitter for more sports updates. You can also download the NDTV Cricket app for Android or iOS.