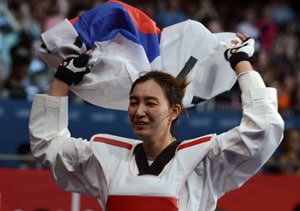 "It feels like flying. The other players prepared well, but I think I had a lot of luck," said Hwang after taking Korea's first gold of the taekwondo competition.

American Paige McPherson beat world champion Sarah Stevenson of Great Britain 5-1 in the first round and then defeated Slovenia's Franka Anic 8-3 for the first bronze medal.

Although Tatar was seeded one place higher than Hwang, there was no doubt who the favourite was going into the final.

Taekwondo has a peculiar seeding procedure which meant Hwang was only third with African champion Seham Elsawalhy of Egypt, who was beaten easily 6-0 by Elin Johansson of Sweden in the first round, the top seed.

While Elsawalhy's flop wasn't exactly a huge shock, Stevenson's first round loss was, although having lost both her parents to cancer over the last 18 months and fought little due to injury, she was perhaps not in the best shape.

Hwang was tested in the early rounds but she beat Ruth Gbagbi of Ivory Coast 4-1 and then ousted Germany's Helena Fromm 8-4.

She went into the final round of her semi against Anic scoreless but soon picked up three points with a head kick, setting her on the way to a 7-0 victory.

And it was a three-point head-kick in a dominant second round against Tatar that ensured she opened up a big gap the Turk was never likely to close.

Comments
Topics mentioned in this article
Taekwondo Olympics 2012
Get the latest updates on ICC T20 Worldcup 2022 and CWG 2022 check out the Schedule, Live Score and Medals Tally. Like us on Facebook or follow us on Twitter for more sports updates. You can also download the NDTV Cricket app for Android or iOS.