South Korea erupted with joy early Saturday after its men beat Asian rivals Japan 2-0 in the play-off for bronze to claim the country's first ever Olympic football medal. 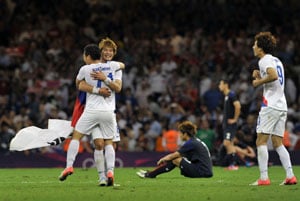 South Korea erupted with joy early Saturday after its men beat Asian rivals Japan 2-0 in the play-off for bronze to claim the country's first ever Olympic football medal.

"I'm very happy that we have routed rivals Japan. I'm so proud of Korea," a 51-year-old man, Yang Byeong-Chul, was quoted as telling Yonhap news agency.

The fans had leapt to their feet and waved the national flag when Arsenal striker Park Chu-Young scored the first goal before the break.

The victory came as Seoul and Tokyo spar diplomatically over disputed islets in the Sea of Japan, known as Dokdo in South Korea and Takeshima in Japan.

"This is a sweet victory over Japan, which always seeks to make trouble over Dokdo," said Kim Jeong-Hyun, a 45-year-old man.

"It is also a good booster for all of us in this sweltering heat," he said, referring to the country's most extreme heatwave in 18 years.

The Chosun Ilbo Daily described the 2-0 victory as a "Perfect Bronze", praising Korea for winning their first Olympic football medal.