Frenchman Florent Manaudou joined his sister Laure as the first champion siblings in Olympic swimming history with a shock victory in the men's 50m freestyle final on Friday. 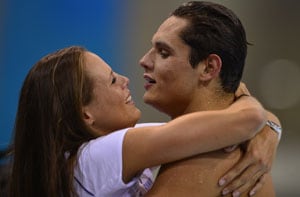 Frenchman Florent Manaudou joined his sister Laure as the first champion siblings in Olympic swimming history with a shock victory in the men's 50m freestyle final on Friday.

Manaudou, 21, the younger brother of the former Olympic women's 400m freestyle champion, hit the wall in 21.34secs to win the furious one-lap dash.

Laure Manaudou, the first Frenchwoman to win Olympic swimming gold when she captured the 400m freestyle crown in Athens in 2004, rushed out on to the pool deck to hug her brother.

"My sister has given me her full support in my Olympic dream and said if I needed her, she would be there for me," said Manaudou, the youngest swimmer in the final.

"We didn't say much, there weren't many words when we hugged, but we understand each other.

"My sister told me she is very proud of me. Maybe she is passing the baton to me, and I'm more stressed when she is swimming than when I am."

It was France's fourth gold medal in the pool, their best performance at an Olympics.

"It all began with my sister in 2004 with the freestyle and then there was Alain Bernard, who was the champion in Beijing," he said.

"Now we are a great swimming nation and I hope it will continue.

"I really want to enjoy what I achieved this evening, I want to call my friends and family."

Manaudou put down his upset win to his self-belief and being relaxed for the all-or-nothing race.

"I arrived at the Olympics with the seventh fastest time this year, but I knew I could swim faster," he said.

"I looked at my stroke a month before I came here and it paid off.

"If I had not believed, I would not have finished first today.

"I thought that I had to be more relaxed in the final. I knew that was the key to a 50m, I have always said that I could do it in an Olympic final.

"It's really great. The qualifying series was the hardest.

"For the final, I thought that I had reached my level and now it's just fun," he explained.

Jones said the runners-up medal would give him motivation to swim on to the 2016 Rio Olympics.

"The time wasn't too bad, I am thankful I got second. I was dreaming of gold and I really wanted first, but I'll have to live with silver and that is enough motivation for another four years," Jones said.

Cielo's world record of 20.91sec still stands and he is relieved to have come away from the Olympics with a medal.

"I wasn't too disappointed, because at least I got a medal, but I wasn't feeling well," Cielo said.

"It was my fourth day of competition and I was tired. I wasn't as good as I was yesterday.

"I am satisfied with my training, but I will make a few changes for Rio."