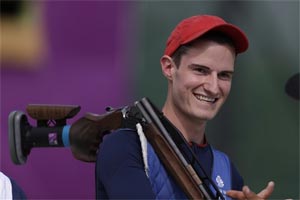 In a see-saw contest Sweden's Hakan Dahlby took silver and Russia's Vasily Mosin won bronze after a shoot-off against Fehaid al-Deehani of Kuwait.

Towering 25-year-old crack shot Wilson -- who only took up shooting in 2006 after damaging his shoulder in a snowboarding accident -- qualified in first place for the final with 143 hits out of 150.

After a bright and breezy morning at the Royal Artillery Barracks the rain hammered down but the sun returned for the final, in which every shot by Wilson was cheered by the packed stand, including the watching Princess Anne.

Wilson is the first medallist in shooting for Britain since Sydney in 2000 when Richard Faulds, who failed to make the final on Thursday, won gold in the same event. Britain also won a silver that year in men's trap.

Wilson is coached by Sheikh Ahmed Al Maktoum, a member of Dubai's royal family, who won the event at the Athens Games in 2004.

In double trap, two targets are released simultaneously from trap machines, travelling at different heights and angles. A round consists of 25 doubles. The shooters fire one shot at each target.

After six days of shooting competition China, the United States and South Korea lead the way on two golds apiece. China have won the most medals overall.

Comments
Topics mentioned in this article
Peter Wilson Olympics 2012 Shooting
Get the latest updates on SA vs IND 2021-22, check out the Schedule and Live Score . Like us on Facebook or follow us on Twitter for more sports updates. You can also download the NDTV Cricket app for Android or iOS.