Saina Nehwal on Thursday created history as she became the first Indian shuttler to reach the semifinals of the Olympics after notching up a hard-fought straight-game victory over Tine Baun of Denmark in the women's singles quarterfinals at the London Games on Thursday. 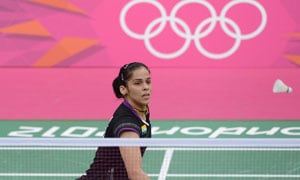 Saina Nehwal on Thursday created history as she became the first Indian shuttler to reach the semifinals of the Olympics after notching up a hard-fought straight-game victory over Tine Baun of Denmark in the women's singles quarterfinals at the London Games on Thursday.

Fourth seeded Saina edged past fifth seed Tine 21-15 22-20 in a 39-minute match at the Wembley Areana to set up a clash with the current world No 1 and World champion Yihan Wang of China in the semifinals, whom she hasn't beaten once in her last five encounters.

With this win, Saina bettered her quarterfinal finish at the Beijing Games four years ago and also excorcised the demons of that painful defeat to Maria Kristin Yulianti of Indonesia.

The world No 5 Indian had to toil hard against the two-time All England Champion Tine, who matched her strokes but was a tad erratic, which proved to be her bane in the quarterfinal match.

Saina was very precise with her strokes, while Tine was erratic initially and it allowed the Indian to lead 11-7 at the break.

After the breather, Saina slowly mixed her strokes to move into the game point at 20-12 with a short smash but she committed some unforced errors and a few judgemental mistakes on her part allowed the Dane to save three game points. Saina finally pocketed the first game with a smash which Tine netted.

In the second game, Tine opened up a slender 3-0 lead and extended it to 10-7 but Saina reeled off four straight points to lead 11-10 at the break once again.

Saina tried to exploit the length of the court and started combining lifts and clears with drops and net-shots but Tine was up for the job as she caught up with Saina at 15-15 and even managed to earn three game points at 20-17.

But Super Saina was not the one to take it lying low as she executed a cross court smash to move to 18-20.

She also pocketed the next point when her stroke was judged 'in' by the line-umpire, much to chagrin of Tine, who thought it was out and was celebrating her comeback by pumping her fists.

After that, Tine committed to three unforced errors as Saina burst into celebration.