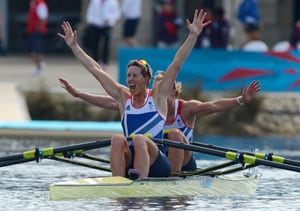 The 36-year-old Glaswegian was climbing to the top of the podium for the first time after three Olympic silver medals in her long and distinguished career.

The British duo, the reigning world champions, were the crew to beat after setting a new Olympic record in the semi-finals earlier in the week.

And so it proved as they held off Australia to extend their unbeaten run to 23 races. Poland finished well off the pace to take bronze.

Grainger, who has taken a sabbatical from studying for a doctorate in homicide to achieve her sporting dream, was immediately enveloped in a bearhug by Steve Redgrave, Britain's five-time Olympic rowing gold medallist, after stepping out of the boat.

"We knew we had all the goods to perform, so it's job well done," Grainger said after regaining her breath.

"Of all my medals this is really one for the people," she added.

"This is for everyone who has helped me and supported me along the way, from my family, through school, and so on."

Watkins added: "I had to ask Katherine if it was all a dream, I can't believe it."

British women were experiencing a case of the proverbial London bus syndrome -- you wait an age for one to come along and them two turn up at once -- as this win came just 48 hours after Heather Stanning and Helen Glover had supplied the host nation with their first ever women's Olympic rowing gold.

It was also a memorable day on the water at Eton Dorney for New Zealand.

Kiwis Eric Murray and Hamish Bond lived up to their status as hot favourites to claim gold in the men's pair, with France narrowly prevailing over Britain in a scramble for silver.

Asked to express how he felt crossing the line Murray replied: "I said to myself 'you bloody beauty'."

Sporting Bradley Wiggins-style sideburns, he added: "We'll celebrate now in typical Kiwi fashion with a few beers, as it's something to say we want to be Olympic champions, it's something else to become one."

As for the sideburns, he said: "That's my wife, she doesn't like clean-shaven men."

Their heroics were followed up by compatriot Mahe Drysdale winning gold in the men's single sculls.

Drysdale, ill when taking bronze at the Beijing Games four years ago, was followed across the line by Ondrej Synek of the Czech Republic, with Britain's Alan Campbell third.

In the day's other final, Germany led from start to finish in the men's quadruple sculls.

Wende said: "We knew from the get-go this was our day."

The runners-up at the 2011 world championships claimed Germany's second rowing title at London 2012 after their men's eight struck gold on Wednesday.

Schulze and his team-mates powered clear from the first stroke with Croatia, favourites after posting the fastest time in the semi-finals, never mounting a serious threat.

"We couldn't find our usual good rhythm, that's our best weapon. We were KO'd in the last 500m.

"But the Germans were really better than us, we didn't lose, they won."

Comments
Topics mentioned in this article
Rowing Olympics 2012
Get the latest updates on ICC T20 Worldcup 2022 and CWG 2022 check out the Schedule, Live Score and Medals Tally. Like us on Facebook or follow us on Twitter for more sports updates. You can also download the NDTV Cricket app for Android or iOS.