Colombian wrestler Jackeline Renteria, who at age 25 has won the second Olympic bronze medal of her career, in 1999 chose wrestling classes that were free instead of judo classes that cost money because her family was so poor. 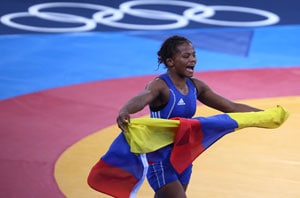 Colombian wrestler Jackeline Renteria, who at age 25 has won the second Olympic bronze medal of her career, in 1999 chose wrestling classes that were free instead of judo classes that cost money because her family was so poor.

Before she was 14 and had not yet begun high school, she saw her athletic future in running until her mother forbid her to run.

More or less gritting her teeth, her mom allowed her to spend her free time practicing gymnastics to bolster the physical education classes at school.

But a teacher at Oscar Scarpetta School in the Siloe neighbourhood of Cali recommended that she start doing judo. Unfortunately, her family couldn't afford it.

The income of her father, a construction worker with no steady job, scarcely covered the family's living expenses.

In an interview several years ago, Jackeline admitted that with the 120,000 pesos (some $60 in today's currency) a year the family could just buy food and pay transport for a month.

She has never forgotten those days of hardships and sacrifices and today she has no shame in recalling them.

Jackeline had to take a decision and she didn't hesitate - she took up wrestling whole-heartedly.

Early in the year 2000 she started practicing day and night and always with her dream in mind - to go far and carve her name into the history of Colombian sport.

She managed to enter a sports club in Cali and began to build a career competing in local, regional, national and, later on, international tourneys.

Standing 5 feet 6 inches, she began racking up a record of victories in tournaments outside Colombia.

Renteria won championships in 2006 in the South American Games in Buenos Aires and at the 2010 edition of that same competition in Medellin, Colombia.

She also won individual gold medals at the Pan American Games at Rio de Janeiro in 2007 and the Central American and Caribbean Games at Mayaguez in 2010.

But her most important triumphs were undoubtedly those she won at the last two Olympic Games in Beijing and London, where she took a bronze in each.

Before arriving in the British capital, Renteria placed first in the Olympic qualifying tournament at Helsinki in May.

Renteria Thursday equaled Barranquilla's Hellmut Bellingrodt, who until Friday was the only Colombian athlete to win two Olympic medals for his country.

Bellingrodt won silver medals for shooting in the running target category at the 1972 Olympic Games in Munich and the 1984 Los Angeles Olympics.

With the bronze Thursday, Colombia won its sixth medal at London, with three silver and three bronze, putting it at 43rd place among medalist countries.

Renteria won her second Olympic medal - the first was at the 2008 Beijing Games - by defeating the Ukrainian Tetyana Lazareva in the 55-kilo category and has promised to do still more, perhaps with a gold medal in the next Olympics at Rio de Janeiro in 2016.

Comments
Topics mentioned in this article
Wrestling Mario Yepes Olympics 2012
Get the latest updates on ICC T20 Worldcup 2022 and CWG 2022 check out the Schedule, Live Score and Medals Tally. Like us on Facebook or follow us on Twitter for more sports updates. You can also download the NDTV Cricket app for Android or iOS.