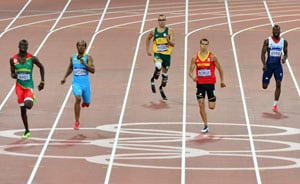 The 25-year-old had on Saturday become the first double amputee to compete in an athletics event at the Olympics, but he was never in contention in his semi-final and finished last in a time of 46.54sec.

Pistorius, though, was far from disappointed at bowing out.

"The whole experience is mind-blowing," said Pistorius, who had been supported in London by his 89-year-old grandmother.

"My aim was to make the semi-final. It's a dream come true. Thanks to everyone for their support. I've got the (4x400m) relay in a few days."

There was a touching moment after the race as Grenada's world champion Kirani James asked to swap bibs with the South African.

"As soon as we crossed the line, we're friends," said Pistorius.

"It was very kind of him. We share a similar life. It's what the Olympics is all about. It's great to make good friends."

Nicknamed 'The Blade Runner' because he runs on carbon fibre blades fought a long battle to be allowed to run in the Olympics.

A panel of experts finally declared he could compete as long as he used the same pair of blades he used in the Paralympic Games.