Japan fell far short of their gold-medal target at the Olympics but still rejoiced on Monday in a record medal haul, hailing it as a boost to the country's recovery from last year's quake-tsunami disaster. 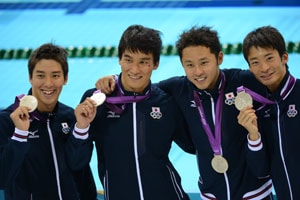 Japan fell far short of their gold-medal target at the Olympics but still rejoiced on Monday in a record medal haul, hailing it as a boost to the country's recovery from last year's quake-tsunami disaster.

"A record-high 38 medals for Japan," blared a front-page headline in the business daily Nikkei's evening edition, hours after the London Games closed. The previous high was 37 from Athens 2004.

But only seven medals in London were gold, with Japanese judokas bagging only one of those. The Japanese Olympic Committee had been gunning for 15 golds, hoping that could invigorate its bid to host the 2020 Games in Tokyo.

Japan finished 11th in the overall medal standings, ahead of Kazakhstan but behind Australia. The US were in top spot with 46 golds.

"To exceed our previous overall best is something that we are happy with, plain and simple," Japan's chef de mission Haruki Uemura told Japanese media. "We had never in the past been getting medals every day like we did here."

"Although the number of gold medals fell short of the nine won in Beijing, many of the silver and bronze medals have greatly moved people who watched how they were won," it said.

Japanese swimmers grabbed a record 11 medals, although none of them were gold, as Kosuke Kitajima failed to lift a third straight double gold in the men's 100m and 200m breaststroke.

The Japanese women's football team went down fighting 2-1 to the United States, whom they beat in the World Cup final a year ago, to claim silver.

Japanese women won medals in table tennis and badminton for the first time -- both of them silver. They also took a first volleyball medal in 28 years -- a bronze.

Some of the gold medals came as no surprise.

Kaori Matsumoto took the only judo title for Japan in the women's 57kg.

Japanese endeavours in London have inspired the country's northeast, which was ravaged by a massive earthquake and tsunami that killed some 19,000 people and sparked a nuclear crisis in March 2011.

He visited the grave of his best friend from childhood, Satoru Onoda, who had encouraged Chida to go for gold after his poor performance at Beijing 2008. Onoda drowned in the monster wave.

"I told him, 'Satoru, I've done it.' I believe he is glad, too, in heaven," Chida told Japanese media. "Your support pushed me to get the silver medal and I am happy I was born in Kesennuma."

"He has given me tremendous power. We will definitely recover. We welcome goods and money but today something reached our hearts," he said.

The Mainichi said that the Japanese team had been inspired by the trauma of last year.

"Many athletes have been engaged in activities to encourage disaster areas in various ways and draw strength from people there who have cheered for them," the newspaper said.

Japanese Olympians "may have taken to heart the power and role of sport more than ever", it added.