Wrestler Geeta Phogat and high jumper Sahana Kumari were eliminated before making any serious attempt to climb the medal podium as India drew a blank on Day 13 of the Olympic Games here on Thursday. 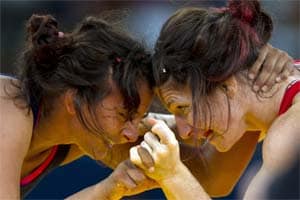 Wrestler Geeta Phogat and high jumper Sahana Kumari were eliminated before making any serious attempt to climb the medal podium as India drew a blank on Day 13 of the Olympic Games here on Thursday.

The country's male boxers also ended their medalless campaign after last man in the fray, Devendro Singh (49kg), lost 18-23 in the quarterfinals despite putting up a gallant fight last night against Ireland's Paddy Barnes in a contest marred by debatable refereeing to further dent the dwindling medal hopes.

Sahana performed well below her personal best and was knocked out of the women's high jump after clearing 1.80m and finishing at joint 15th in the Group B of the qualifying competition at the Olympic Stadium.

The 30-year-old athlete sailed over the bar at the first attempt with a 1.80m leap but failed in her endeavour to clear the 1.85m mark in all her three attempts and got eliminated.

The Bangalore-based athlete had made it to the Games with a leap of 1.92m at the National Inter-State Senior Athletics Championships in Hyderabad on June 23, but failed to come anywhere near that mark.

The best clearance in the event was by Uzbekistan's Svetlana Radzivil, who topped Group B with her season's best of 1.96m to sail into the 12-woman final scheduled on August 11.

Grappler Geeta, gold medal winner in the 2010 Delhi Commonwealth Games, was up against a formidable rival -- 2004 Athens silver medalist and 2008 bronze winner Tonya Lynn Verbeek of Canada -- and fought bravely before losing the 55kg bout in the last minute.

She got another chance to at least gain the bronze when Verbeek stormed into the finals, but was overwhelmed 3-0 by Ukraine's Turkmenistan-born rival Tetyana Lazareva in repechage round two and made her exit from the Games.

Geeta was overwhelmed by the 31-year-old Ukraine girl, who started on an aggressive note to nearly pin down the Indian with her superior technique and strength.

In the first period, Tetyana bagged eight technical points while in the second round, she gathered one more to emerge clear winner over the 23-year-old Geeta.

20-year-old Manipuri Devendro fought his heart out but could not prevail over his stronger opponent.

The high-scoring result left the Indian contingent fuming as they claimed that the refereeing had gone heavily against the diminutive Manipuri who was warned once in the second round for head-butting his opponent.

With Devendro's exit, the Indian challenge in the boxing ring came to an end with only M C Mary Kom providing the spark with a historic bronze medal in women's boxing, which was introduced in the Olympics for the first time.

Seven male boxers were in fray here, including 2008 Games bronze-medallist Vijender Singh (75kg), who also lost in the quarterfinals.

Backed by the packed arena, Barnes took an early lead by winning the first round 7-5 and maintained the tempo right through to send Devendro packing from of his debut Olympics much to the disappointment of the Indian fans.

Two-lap racer Tintu Luka would be seen in action later in the day in the women's 800m semi-finals.

Luka, who has a personal best of 1:59.17, clocked the 13th best time in the heats, going into the semifinals, which will be competed by 24 runners out of which eight will make it to the final round.

Comments
Topics mentioned in this article
Olympics 2012 India
Get the latest updates on ICC T20 Worldcup 2022 and CWG 2022 check out the Schedule, Live Score and Medals Tally. Like us on Facebook or follow us on Twitter for more sports updates. You can also download the NDTV Cricket app for Android or iOS.