Michael Phelps flipped away his cap in disgust, having blown the race with a blunder at the end. He hardly looked like the swimmer who had just equaled the record for most Olympic medals. 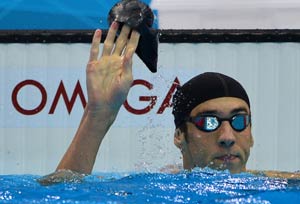 Michael Phelps flipped away his cap in disgust, having blown the race with a blunder at the end.

He hardly looked like the swimmer who had just equaled the record for most Olympic medals.

Phelps won his 18th career medal Tuesday night, but it was only a silver. Having led the entire way in the 200-meter butterfly, he tried to glide to the wall after his final stroke and was out-touched by Chad le Clos of South Africa.

Le Clos pounded the water when he saw the "1'' beside his name.

Phelps hung on the lane rope and buried his face in his hands, disgusted with himself for having squandered another chance to win his first gold of the London Games.

Despite his mistake, Phelps tied Soviet gymnast Larisa Latynina for the most Olympic medals. But he wanted to take the mark down with a flourish, not back into it. In fact, this was a shocking mistake by a swimmer who won a memorable race at the Beijing Games when a rival made the very same error.

Four years ago, Milorad Cavic thought he had the 100 fly in the bag after his final stroke. Phelps made the split-second decision to get in one more stroke and slammed into the wall - one-thousandth of a second ahead of the Serbian swimmer.

This time, it was Phelps on the losing end. He was also denied a chance to become the first male swimmer to win the same individual event at three straight Olympics. Still, before the night was done, Phelps was expected to claim the medal record all to himself. He was swimming the anchor leg for the favored Americans in the 4x200 freestyle relay.

In the first final of the night, American Allison Schmitt won the 200 freestyle with a dominating performance that left everyone else, including teammate Missy Franklin, battling for the other medals.

Schmitt won with an Olympic-record of 1:53.61. France's Camille Muffat took silver in 1:55.58, almost a body length behind, while Bronte Barrett of Australia took the bronze over Franklin by a thousandth of a second. Barrett touched in 1:55.81. Franklin, who led after the first 50, was fourth in 1:55.82.