Olympic bronze medallist M.C. Mary Kom on Tuesday slammed the level of refereeing in the boxing competitions of the London Games. 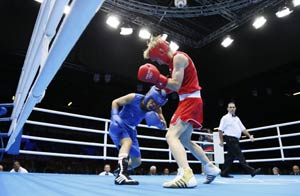 Olympic bronze medallist M.C. Mary Kom on Tuesday slammed the level of refereeing in the boxing competitions of the London Games.

Mary Kom said the decision making not only affected India boxers and there were protests from boxers across the participating nations.

While Mary Kom achieved a first for India in the sport by winning the bronze in the 51kg class, the men's team surprisingly failed to win a medal.

Controversial decisions were made during bouts of Sumit Sangwan, Manoj Kumar and Vikas Krishan, who lost his fight in the pre-quarterfinals after being declared the winner.

Mary Kom was disappointed with the men's team result and said she expected at least medals from the team comprising Beijing bronze medallist Vijender Singh.

"The boys could not win and I don't feel good about. We were expecting two three medals. There was a lot of politics this time around. A lot of protest was happening. It was not only us, the other countries also objected to decisions. Things like these should not happen in the Olympics. Some of judges and referees did not have the experience," she said during a felicitation ceremony after her arrival here Tuesday.

Referee Ishanguly Meretnyyazovwas of Turkmenistan was expelled from the London Olympics for the decisions he made during fight in which the outcome was overturned.