Indian doubles pair of Jwala Gutta and Ashwini Ponnappa are out of the Olympics 2012 officially. This after an appeal by Indian duo that a Japan-Chinese Taipei match in their group seemed fixed was rejected today. Eight players in the women's doubles event were disqualified today for throwing away their matches. 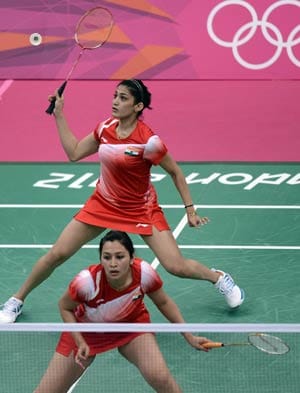 Indian doubles pair of Jwala Gutta and Ashwini Ponnappa are out of the Olympics 2012 officially. This after an appeal by Indian duo that a Japan-Chinese Taipei match in their group seemed fixed was rejected today. Eight players in the women's doubles event were disqualified today for throwing away their matches.

The Badminton World Federation (BWF) has disqualified China's Yu Yang and Wang Xiaoli, South Korea's Ha Jung-Eun and Kim Min-Jung, Jung Kyung-Eun and Kim Ha-Na also of South Korea, and Indonesian pair Meiliana Jauhari and Greysia Polii, accusing them of attempting to manipulate the final standings in the first-round group stage, with two pairs who had already qualified apparently wanting to lose to secure a favourable draw in the next round.Â

The four teams that have gained from their loss are - Russia's Sorokina Valeria and Nina Vislova who are already through to the semi-final, Canada's Bruce Alex and Li Michelle too are into the semis, Australia's Leanne Choo and Renuga Veeran and South Africa's Michelle Edwards and Annari Viljoen reached the quarter-finals but were ousted.

The Indian shuttlers had said earlier today that they suspected that in their group, Japan's Mizuki Fujii and Reika Kakiiwa deliberately lost to Yu Chin Chien of Chinese Taipei to get an easier draw in the next round - a result that pushed the Indians out of the quarterfinals.Â  Ashwini Ponnappa told NDTV ealier in the day, " I suspect foul play in the way Japan lost to Chinese Taipei."

Gutta and Ponnappa easily beat Singapore pair Shinta Mulia Sari and Lei Yao 21-16, 21-15 in their group B match on Tuesday. But the Indian pair was out of the competition because they conceded 2 points more than they should have in the group stage. They finished third in Group B behind Japan and Chinese Taipei based on the difference between points won and lost in all matches, though they tied with the two teams on number of matches won.

They appealed, but it was rejected by the Badminton World Federation. Ponappa's doubles partner Jwala Gutta said she was shocked. "We know both the players - the Japanese and Chinese Tipaei players. I was very shocked. I think Japanese wanted to lose the match; the other side had nothing to do with this." Speaking on matches being thrown away, Gutta said: "It is wrong and unfair. The importance of Olympics dies. We worked very hard and I am very proud of myself. If given a chance we are ready to go into the quarterfinals."

The BWF has charged the players disqualified today with "not using one's best efforts to win a match" and "conducting oneself in a manner that is clearly abusive or detrimental to the sport". A Group A match between the powerful Chinese pairing of Yu Yang and Wang Xiaoli and unseeded South Korean pair Jung Kyung and Kim Ha Na came under the scrutiny of the BWF after the Chinese lost heavily. The longest rally in the match was just four shots.

Their defeat meant Yu and Wang avoided playing fellow Chinese pair Tian Qing and Zhao Yunlei, who had finished second in Group D. Yu said after the match: "We've already qualified, so why would we waste energy? It's not necessary to go out hard again when the knockout rounds are tomorrow."

A Group C match in which South Korean third seeds Ha Jung-Eun and Kim Min-Jung beat Indonesian pair Meiliana Jauhari and Greysia Polii was also investigated by the governing body. Tournament referee Torsten Berg came on to court during that match to warn the players about their conduct and was thought to have shown a black card - meaning a dismissal - but it was apparently rescinded. Berg said after the match: "We have looked seriously into the case and as referee I have taken a decision and made a report to the BWF which will be known in due course."

Comments
Topics mentioned in this article
Badminton Olympics 2012 India Jwala Gutta
Get the latest updates on ICC T20 Worldcup 2022 and CWG 2022 check out the Schedule, Live Score and Medals Tally. Like us on Facebook or follow us on Twitter for more sports updates. You can also download the NDTV Cricket app for Android or iOS.