A jittery India crashed to a 2-5 defeat against Germany for their third straight reverse in Group B of the Olympic men's hockey competition here on Friday. 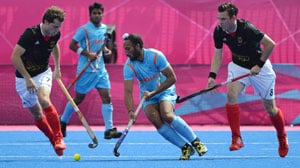 A jittery India crashed to a 2-5 defeat against Germany for their third straight reverse in Group B of the Olympic men's hockey competition here on Friday.

The Germans, while recording their third consecutive win, gave a fine exhibition of their efficiency based on strong basics, the Indians, after an enthusiastic 15 minutes at the start, simply caved in under pressure.

Leading the German charge was 20-year old Florian Fuchs with three strikes (7th, 16th, 37th) and Oliver Korn (24th) and Christopher Wesley (33rd) chipped in with one apiece while India's goals came from Ramachandra Raghunath, whose 14th minute drag-flick got deflected into the net, and Tushar Khandker (62nd).

While Germany and the Netherlands are virtually assured of semi-final berths with nine points apiece, India are out of medal contention and have to be content to play for minor positions regardless of their results against South Korea and Belgium in their remaining two league games.

The Indians showed a lot of dash and flair in the first quarter when they had the German defence under pressure and even struck the equaliser, but faded away once the defending champions got going.

As always, India's game was all about instinct and individual skills rather than any structure or plan in sharp contrast to the well-drilled Germans who epitomized team effort.

As in the previous game, it was the Indian midfield and deep defence that were guilty of unpardonable lapses by way of leaving a lot of space for the German forwards and also poor marking inside the striking circle.

The Indian defence was repeatedly caught flat-footed by the long balls that the Germans employed with success while swinging from defence to attack in the blink of an eye. Their slick ball rotation too put the Indians in a tangle.

After repelling early Indian raids, Germany took the lead. Fuchs latched on to a long ball and his first attempt came off goalkeeper Sreejesh's pads, but even as the custodian lost his footing, the German forward reverse flicked to the second post past defenders Manpreet Singh and Ignace Tirkey.

India kept their composure to force a penalty corner that Raghunath converted as a defender unwittingly deflected his attempt past an otherwise solid goalkeeper Max Weinhold.

Thereafter, it was virtually a one-way traffic as Germany stepped up the pace while the back-pedalling left acres of space to be exploited. Fuchs struck again to put the Germans ahead as he swept home a rebound off Sreejesh.

Goals by Korn, who put home another rebound after Sreejesh had foiled veteran Mathias Witthaus for the third goal and just before the break, Wesley scored off a Christopher Zeller pass to give Germany a commanding 4-1 lead.

In less than a minute after resumption, the Germans moved to a 5-1 lead as Fuchs completed a swift Zeller move to virtually seal the game.

While the Germans then seemed to step off the pedal, the Indians managed to put together a few moves leading to a couple of penalty corners, but on the day, Weinhold was simply unbeatable under the German bar.

With about 15 minutes left, Sreejesh made way for the original lead goalkeeper and team captain Bharat Chetri, but by then, the damage was irreparable.

In the last quarter, India with their pride at stake, managed to strike their second goal as Khandekar found the boards with a weak push that Weinhold shockingly allowed between his feet, but it was all too little too late for the Indians.

Comments
Topics mentioned in this article
Olympics 2012 India Hockey
Get the latest updates on ICC T20 Worldcup 2022 and CWG 2022 check out the Schedule, Live Score and Medals Tally. Like us on Facebook or follow us on Twitter for more sports updates. You can also download the NDTV Cricket app for Android or iOS.