London 2012: Hansen battles back from crash to win omnium gold

Denmark's Lasse Norman Hansen blocked out the Olympic velodrome's wall of sound to upset British hopes and surge to cycling gold in the Olympic omnium on Sunday. 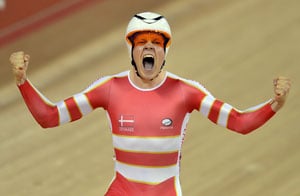 Denmark's Lasse Norman Hansen blocked out the Olympic velodrome's wall of sound to upset British hopes and surge to cycling gold in the Olympic omnium on Sunday.

Hansen recovered from a heavy crash in the penultimate event to finish ahead of France's Bryan Coquard and Britain's Ed Clancy, as the hosts missed out on gold for the only second time in four days.

"I came here just to try for a medal, so to win is unreal!" said Hansen, who finished with the lowest points tally of the field.

Competing in his first Olympics after a third place at the Melbourne world championships in April, Hansen won't forget his campaign in a hurry.

The tall 20-year-old from Faaborg crashed in the penultimate event of the scratch race when Clancy cut inside him on the track.

He got up gingerly to finally rejoin a peloton that was attacking and counter-attacking its way over the 60 laps.

And to the applause of a velodrome that seemed to have eyes only for Clancy, the Dane eventually fought his way back into contention and crucially closed his one-lap deficit.

"The crash gave me some extra power and an adrenaline kick. I still got hurt, it wasn't an advantage at all but I just got mad and I wanted it even more," he added. "The crowd was crazy, you can't hear yourself think. But I just shut down my brain and let my legs do the talking."

The sixth and final event was the 1 km time trial.

And while that was dominated by Clancy in a stunning time of 1min 00.981sec, only two tenths off the Olympic record set by Chris Hoy in Athens eight years ago, Hansen stopped the clock at 1:02.314 to finish third and secure victory.

"It's weird but fantastic. I would have been really happy with a medal. Standing here with the top one, a gold medal, is just a crazy feeling," added the Dane.

Coquard, a two-time junior world champion in the omnium, saw his hopes momentarily dashed with a 12th place in the individual pursuit, his weakest event.

But he fought his way back into contention with a third place in the scratch and a fourth in the kilo time trial to finish on 29 points, two more than Hansen.

"For the finish, the time trial was very difficult," admitted Coquard, who is set to begin a road racing career with France's professional Europcar team.

"The silver medal is amazing for me, it's a dream."

Clancy had given himself a small mountain to climb after the second of three events held on Saturday, the points race, in which he finished 11th.

The Englishman, who helped drive Britain to team pursuit gold in a new world record time on Friday, notably pulled himself back into contention with a fifth place in the elimination race won by Coquard.

Clancy then boosted his medal chances with second place in the 4 km pursuit, only to finish 10th in the scratch. His victory in the last event, the 1 km time trial, proved decisive.

"At one point I was looking at getting the gold but, in the scratch, it just slipped away," said Clancy, who was third on 30 points.