Four years after winning its first Olympic gold, France's men's handball team did it again on Sunday, but endured a tense second half on its way to the 22-21 victory. The result was the first time that a male handball team has won back-to-back gold medals. 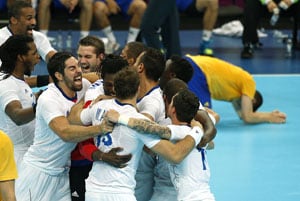 Four year after winning its first Olympic gold, France's men's handball team did it again on Sunday, but endured a tense second half on its way to the 22-21 victory. The result was the first time that a male handball team has won back-to-back gold medals.

"I have lived the best day of my life," defender Jerome Fernandez said.

France missed chances to score that would have made for an easier victory, and was indebted to the quality of its defense, with keeper Thierry Omeyer making 11 saves and veteran Didier Dinart blocking and keeping the Swedes away from goal. The mass of French supporters in the stadium also helped, shouting "Allez les Bleus" and jumping around through much of it.

The win was particularly sweet for the French because some critics had called for changes in the team after its 11th place finish in the European championships earlier this year. They feared the players, 10 of whom were among the winners in Beijing, were too old, that London 2012 was a tournament too far.

"We showed the people who pitied us that they should feel silly and bad," said Nikola Karabatic. "It feels nice to show the world we are the same team as before."

Few had expected Sweden to make the finals before the tournament began. It picked up its fourth Olympic silver medal since 1992, having never won gold. Earlier, Croatia beat Hungary 33-26 to get the bronze.

Both teams struggled to score in the first half. Swedish keeper Johan Sjostrand saved four of the first six shots that France hurled at him and after 10 minutes the score was 3-3. The teams stayed within a point of each other until the 24th minute, when France opened up a three-point lead through Xavier Barachet's third goal of the half. Sweden pulled one back almost instantly, but the world champion went into the break 10-8 up.

Sweden scored soon after the restart, and would come within a goal of France two more times in the half.

On 46 minutes, Niclas Ekberg cut France's lead to 16-15, but Sweden then lost Kim Ekdahl du Rietz for two minutes for a foul. France scored twice during the suspension to relieve some of the pressure. In the final minute of the game, Luc Abalo scored to make it 22-20. Ekdahl du Rietz of Sweden struck one more time, but France called a time out and held on for the win.

"We wanted to get the gold, but have to make do with silver. This is life, and we have to keep smiling and celebrate doing so well at these Olympics," Swedish coach Staffan Olsson said. "The players were so tired at the end but kept trying, and nearly snatched the tie or better. So I cannot ask for any more from them."

The French victory underlined their domination in handball in recent years. After winning in Beijing, the team won the European championship in 2010 to become reigning Olympic, world and European title holders - the first nation to do that treble.

"We were superb. The players were outstanding and the fans incredible. What a magnificent game, atmosphere and occasion," coach Claude Onesta said. "To win it four years ago was fantastic, but to do it in London in the next Olympics was even better. We have a very experienced team which knows how to win the big occasions and we did it again."

Comments
Topics mentioned in this article
Sweden Hatem Ben Arfa Karim Benzema Euro 2012 France Olympics 2012 Handball
Get the latest updates on ICC T20 Worldcup 2022 and CWG 2022 check out the Schedule, Live Score and Medals Tally. Like us on Facebook or follow us on Twitter for more sports updates. You can also download the NDTV Cricket app for Android or iOS.