The United States' male gymnasts have unanimously expressed pride in their performance in the all-around Olympic team competition, despite a disappointing fifth-place finish. 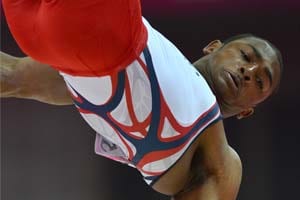 The United States' male gymnasts have unanimously expressed pride in their performance in the all-around Olympic team competition, despite a disappointing fifth-place finish.

The USA had impressed in qualifying, finishing top of the rankings, but things fell apart at London's North Greenwich Arena in Monday's final, despite passionate support from watching American fans.

Third at last year's World Championships in Tokyo, the USA never recovered from a poor start that saw Sam Mikulak stumble during his floor routine before John Orozco and Danell Leyva struggled on the pommel horse.

Orozco, the reigning national champion, also sat down as he landed his vault and the 19-year-old from The Bronx in New York had tears in his eyes as he returned to his seat at the side of the arena.

"Can't make excuses for myself but I'm very proud of team USA," he wrote on Facebook afterwards.

"We fought and gave it our all. I'm thankful to be here and represent USA as an Olympian."
Leyva tweeted: "Didn't turn out as planned but you better believe this is gonna serve as huge motivation for everything from here on out #AlwaysFight."

Although the podium eluded them, the team finished strongly, but they still wound up 1.759 points shy of third-placed Great Britain and a sizeable 6.045 points behind champions China.

"We saw what they were capable of in the team prelims, but team finals is a new competition and that's why we have the competition," said coach Kevin Mazeika. "The guys fought really hard from start to finish."

Team captain Jonathan Horton said his team-mates could take heart from the way they finished the competition.
"I'm just really proud of the guys," he said.

"We struggled, but we continued to show what this team is about. We have this never-stop-fighting attitude and that's exactly what we did.
"We never stopped fighting in this competition. Deep down in my heart, I believe we are a great team."

Despite their disappointment, the American men can continue to harbour hopes of medal success in the individual competitions.

Leyva will start as one of the favourites in the individual all-around final on Wednesday, having top-scored in qualifying, while Orozco is also bidding for glory in the event.

Jake Dalton is due to compete in the floor final, with Mikulak scheduled to contest the vault final, while both Horton and Leyva will feature in the high bar final.