Gabrielle Douglas made history on Thursday by becoming the first African-American to win an individual women's gymnastics gold medal at the Olympic Games. 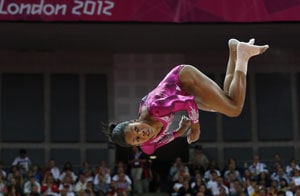 Gabrielle Douglas made history on Thursday by becoming the first African-American to win an individual women's gymnastics gold medal at the Olympic Games.

Competing in only her second major international event, the 16-year-old saw off a determined challenge from Russia's Viktoria Komova to secure the all-round title at London's North Greenwich Arena.

"I think history has been made, it's fantastic," said USA team co-ordinator Martha Karolyi, the former coach of Romanian great Nadia Comaneci.

"I'm so happy for Gabby. She's just such a nice girl and so hard-working and dedicated. She proved that by moving away from home just to seek higher quality coaching, and there's everything to admire about her."

The Olympic triumph caps a remarkably swift rise for Douglas, who left her home in Virginia at the age of 14 and moved to Iowa in order to link up with renowned coach Liang Chow.

The graceful teenager struggled at the 2011 World Championships in Tokyo but shot to prominence at the US trials a month ago, when she defeated reigning world champion Jordyn Wieber in the individual all-around event.

"She had the skill and she'd be flying all the time, but sometimes she'd go out of control. We worked very hard with her," said Karolyi, who christened Douglas the 'Flying Squirrel' for her uneven bars routine.

"But it's pretty unusual. She really charged up and made a fantastic improvement in a short amount of time.

"I don't think I've seen it before. I don't recall anybody rising from an average-good gymnast to a fantastic one so quickly."

Douglas becomes the first US woman to win multiple gold medals at the Olympics since Shannon Miller at Atlanta in 1996, having already played a part in the Americans' team success on Tuesday.

There could be more glory to come as well, with Douglas set to compete in the finals of both the balance beam and the uneven bars.

Twelve years after Dominique Dawes of the United States became the first African-American woman to win an Olympic gymnastics medal, Douglas has broken down another barrier in a sport traditionally dominated by white athletes.

"I kind of forgot about that!" she said when informed of her achievement.

"Man, that's awesome. To be the first African-American to win the Olympics, that's definitely an amazing feeling."

"Chow and Li have definitely whipped me into shape," said the talkative Douglas, a devout Christian and regular Twitter user.

"In the last five months, it's definitely been hardcore in the gym. We've just been pushing each other every single day.

"Even in the hard times, Chow still kept pushing me, and even though I was all like, 'Whatever', in the end, it all pays off."

Douglas is the second Olympic champion to emerge from Chow's Gymnastics and Dance Institute in Des Moines after Shawn Johnson, who won a balance beam gold medal and three silver medals at the Beijing Games four years ago.

"She is a very graceful gymnast and also she has the strength and determination," said a beaming Chow.

"Her mother came to see me one day and said: 'My daughter wants to be the Olympic champion.' I said: 'OK. I'll give it my best shot.'"

Virat Kohli Breaks Another Record. This Time On Instagram