With a display of stunning elegance and control, Russia's Evgeniya Kanaeva retained her Olympic rhythmic gymnastics title on Saturday to confirm her status as the sport's outstanding performer. 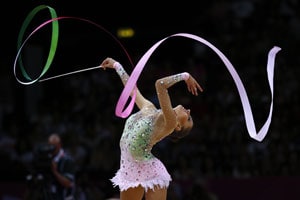 With a display of stunning elegance and control, Russia's Evgeniya Kanaeva retained her Olympic rhythmic gymnastics title on Saturday to confirm her status as the sport's outstanding performer.

The three-time world champion scored a total of 116.900 points to finish 2.400 points above compatriot Daria Dmitrieva at Wembley Arena in west London, while Liubou Charkashnya of Belarus took the bronze medal.

Kanaeva becomes the first person to have won two individual rhythmic gymnastics titles at the Olympics, following her success in Beijing four years ago.

The 22-year-old from Omsk top-scored in three of her four routines, keeping Russia on top of the podium for the fourth straight Games after previous successes for Yulia Barsukova in 2000 and Alina Kabaeva in 2004.

Along with synchronised swimming, rhythmic gymnastics is one of only two sports at the London Games that is practised exclusively by women.

The gymnasts perform floor routines accompanied by music with four pieces of apparatus -- a hoop, a ball, a set of clubs, and a ribbon -- and are awarded a score by three juries.

Kanaeva had dropped her hoop during qualifying on Thursday, but she made no such mistake during a delightful opening routine with that piece of apparatus and took the lead with a score of 29.350 points.

Rhythmic gymnastics is often described as a cross between ballet and gymnastics, but the ball routine suggests freestyle football is an element of the mix as well.

The final clashed with the culmination of the men's football tournament next door at Wembley Stadium, but even Brazil and Mexico's millionaire players would have marvelled at the audacity of Kanaeva's footwork with the ball.

Like all the gymnasts, Kanaeva displayed remarkable dexterity and flexibility to send the rubber ball rolling around the contours of her body, even cradling it in the small of her back at one point.

After two rotations, she led Dmitrieva by 1.900 points but a faultless display with the clubs enabled her to stretch her advantage to 2.600 points ahead of the final routine.

To the tune of Chopin's 'Fantasie-Impromptu', Kanaeva brought home the gold with a beautifully accomplished 90-second ribbon display that drew roars from the sizeable Russian contingent in the crowd.

Comments
Topics mentioned in this article
Gymnastics Olympics 2012
Get the latest updates on ICC T20 Worldcup 2022 and CWG 2022 check out the Schedule, Live Score and Medals Tally. Like us on Facebook or follow us on Twitter for more sports updates. You can also download the NDTV Cricket app for Android or iOS.