Germany won the Olympic title for the second successive time when they triumphed 2-1 against the Netherlands, the former champions, in a blood and thunder final on Saturday. 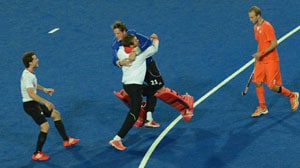 Germany won the Olympic title for the second successive time when they triumphed 2-1 against the Netherlands, the former champions, in a blood and thunder final on Saturday.

Both goals were scored by Jan Philipp Rabente, who thus denied the Dutch their dream of becoming the first nation to win both hockey golds at the same Games.

It was also frustrating for the Dutch as they had beaten the Germans in their pool match earlier in these Games.

But this is a very resilient German team, which they proved by scoring three late goals to defeat world champions Australia in the semi-finals.

"For the Dutch it was harder to play the final because until then they had never had any difficulty," said Germany coach Markus Weise.

"We had lost one and drawn one and we had something to think about."

Dutch manager Paul van Ass said: "I have to say the Germans defended superbly today. We are very skilful, but the Germans won it despite our skills."

Though the Netherlands had reached the final with a 9-2 hammering of Great Britain, they found far fewer openings this time, especially in the first half.

Players with the skill of Florian Fuchs and Christopher Zeller for Germany, and Billy Bakker and Rogier Hofman threatened to break the defensive walls.

Eventually the three best chances of the half were created by the Dutch, but Germany scored the only goal.

First Bakker wriggled through and forced a good save from Max Weinhold, and then Bakker was set up by Robbert Klemperman only for his shot to be deflected just past a post by a defender.

When Rod Weusthof was foiled only by a last ditch parry after a penalty corner it seemed that The Netherlands would make a breakthrough.

Instead Germany did, two minutes from half-time.

Timo Wess sent a good through ball to Rabente, who forced his way past three defenders and, as he was falling, somehow levered the ball past the goalkeeper.

When Christopher Zeller hit a post for German early in the second half, it seemed to sting the Dutch team.

It was his eighth goal of the tournament, and his seventh from penalty corners, and with a quarter of an hour to go it jerked the match into a last phase of feverish intensity.

As the teams tired, openings began to present themselves more often. But it was Germany who found a little more from their reserves and made the killer thrust.

Rabiente did well to force his way into the penalty circle, only for the Dutch defence to repel the attack.

But when Tobais Hauke launched the ball back into the danger area, two German players plunged for the ball near a post and Rabiente got the golden touch.

There was still time for The Netherlands to rouse themselves for a couple of desperate last efforts, during which a heavy collision caused Germany's Timo Wess to be led off injured.

But it was not quite enough, and the finish saw the pitch strewn with exhausted, laid flat orange-shirted players, and embracing white-shirted ones. Australia scored a deserved 3-1 win over Great Britain which earned them the bronze medal.

India lost their sixth game out of six when a 3-2 defeat to South Africa condemned them to 12th and last place in the tournament.

It was the first time that the eight-time champions had gone through an Olympics without winning a match.

Comments
Topics mentioned in this article
Hockey Olympics 2012 Netherlands Germany
Get the latest updates on ICC T20 Worldcup 2022 and CWG 2022 check out the Schedule, Live Score and Medals Tally. Like us on Facebook or follow us on Twitter for more sports updates. You can also download the NDTV Cricket app for Android or iOS.