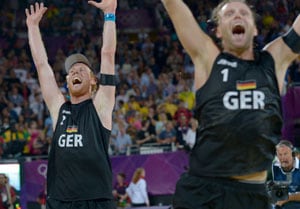 Emanuel was bidding to reclaim the title he won alongside Ricardo Santos in Athens in 2004, but despite a second-set rally, the Brazilians fell 23-21, 16-21, 16-14 in an enthralling and keenly balanced encounter.

In the four previous Olympic men's finals, Spain's Javier Bosma and Pablo Herrera, runners-up in 2004, had been the only team to break the Brazilian-American hegemony in the event.

In front of 15,000 raucous and appreciative fans inside the purpose-built open-air arena at London's Horse Guards Parade, the teams matched each other stride for stride in a taut first set.

The Brazilians procured two set points but squandered both of them and when Emanuel gifted Germany a set point by sending the ball long, Reckermann needed no second invitation to power home a set-winning smash.

Stung into action, the Brazil pair upped their game in the second set, streaking into a healthy lead and producing a string of breath-taking shots as they levelled the match.

Reckermann and Brink nosed ahead in the deciding set and although Brazil saved three match points, the Germans finally prevailed on their fourth match point to land a seismic blow for European beach volleyball.

Martins Plavins and Janis Smedins earlier won Latvia's first ever Olympic beach volleyball medal and first medal of the London Games by fighting back from behind to win the bronze play-off.

"The result is unbelievable for Latvia," said Plavins.

"When we were down five points in the second set, I spoke to Janis and said that we just need to keep on trying for Latvia and see what happens."

Comments
Topics mentioned in this article
Beach Volleyball Olympics 2012
Get the latest updates on ICC T20 Worldcup 2022 and CWG 2022 check out the Schedule, Live Score and Medals Tally. Like us on Facebook or follow us on Twitter for more sports updates. You can also download the NDTV Cricket app for Android or iOS.