Neymar is hearing more reaction from the crowd over his perceived dives than his goals at the London Games. 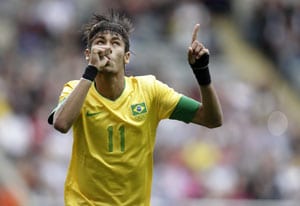 Neymar is hearing more reaction from the crowd over his perceived dives than his goals at the London Games.

The Brazilian star hasn't received a very warm reception from the British crowds so far but says he is just fine with that.

He was jeered throughout Brazil's win over Honduras in the men's quarterfinals on Saturday, especially after a foul on him led to a controversial red card to a Honduran defender.

It wasn't the first time Neymar heard from the British fans and he doesn't expect it to be the last. He says he knows the taunting will likely continue when Brazil faces South Korea in the semifinals on Tuesday.

Brazil coach Mano Menezes says it's a cultural matter and the player will have to get used to it, especially when playing in Britain.

Comments
Topics mentioned in this article
Football Honduras Brazil Uruguay Olympics 2012
Get the latest updates on ICC T20 Worldcup 2022 and CWG 2022 check out the Schedule, Live Score and Medals Tally. Like us on Facebook or follow us on Twitter for more sports updates. You can also download the NDTV Cricket app for Android or iOS.