Japan stayed on course for an Olympic football double as their men's team joined the women's side in reaching the tournament semi-finals following a 3-0 win over 10-man Egypt on Saturday. 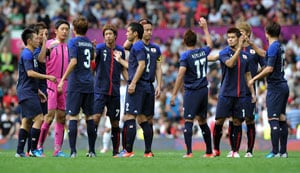 Japan stayed on course for an Olympic football double as their men's team joined the women's side in reaching the tournament semi-finals following a 3-0 win over 10-man Egypt on Saturday.

Goals from Kensuke Nagai, captain Maya Yoshida and Yuki Otsu took Japan through against an Egypt side who played more than half the match a man down after defender Saadeldin Saad was sent off in the 41st minute for denying Japan forward Manabu Saito a goal-scoring opportunity.

Nagai gave Japan a 14th-minute lead, shooting into an empty net after Egypt goalkeeper Ahmed El Shenawi collided with one of his own defenders in trying to deal with a through ball.

Egypt, despite being down to 10 men, came close to an equaliser when Mohamed El Neny's dipping shot was well-saved by Japan keeper Shuichi Gonda.

However, shortly afterwards, Japan put the result beyond doubt with two goals in the space of five minutes.

The unmarked Yoshida's 78th minute header made it 2-0 before another header, from Otsu, completed the scoring.

Afterwards, a delighted Yoshida said: "The match was perfect. I had chances to score in the group stage and, finally, I managed to score today, so I am very satisfied.

"We have to take the medal, that's all. That's what I say to the people in Japan," he added.

Delighted Japan coach Takashi Sekizuka said: "Being able to win in the quarter-finals is brilliant, magnificent."

Japan will play Mexico in the semi-finals after the Central Americans survived a dramatic fightback by Senegal to win 4-2.

Senegal came from 2-0 behind at London's Wembley Stadium, in front of a crowd of more than 81,000 to force extra-time.

Mexico will return to Wembley for their last four clash on Tuesday after goalkeeeper and captain Jose Corona made several fine saves.

His side side went ahead in the 10th minute when Jorge Enriquez headed in a free-kick and made it 2-0 just after the hour through Javier Aquino.

Moussa Konate, the tournament's top scorer, pulled a goal back in the 69th minute, for his fifth goal the first that Mexico had conceded this Olympics.

And seven minutes later it was 2-2 when substitute Ibrahima Balde headed in from a corner.

In extra-time Giovani dos Santos restored Mexico's lead before the result was put beyond doubt in the 109th minute when Hector Herrera, who will miss the semi-final through suspension, headed into an empty net.

"I'm so happy," said dos Santos. "It's an unbelievable experience for me and the team."

Meanwhile Konate put defeat in perspective by saying: "Today it was our bad day. I'm so happy for my team. This is the first time we have ever played in the Olympics."

Comments
Topics mentioned in this article
Football Olympics 2012 Japan
Get the latest updates on ICC T20 Worldcup 2022 and CWG 2022 check out the Schedule, Live Score and Medals Tally. Like us on Facebook or follow us on Twitter for more sports updates. You can also download the NDTV Cricket app for Android or iOS.