Brazil coach Mano Menezes insists there is no chance his players will underestimate Mexico as the five-time world champions look to win a first Olympic gold in the men's final at Wembley on Saturday. 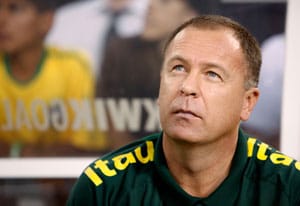 Brazil coach Mano Menezes insists there is no chance his players will underestimate Mexico as the five-time world champions look to win a first Olympic gold in the men's final at Wembley on Saturday.

While Brazil have graced the World Cup with some of the best players and most dazzling performances ever seen on football's grandest stage, the Selecao have never managed to replicate those golden moments at the Games.

Brazil were bronze medalists in 2008 but this weekend's showdown with Mexico will be their first Olympic final since 1988 in Seoul, when a team led by Romario and Bebeto finished with the silver.

The South Americans also won the silver in the 1984 Games in Los Angeles, but the failure to bring home a gold has rankled with such a proud football nation for decades.

Brazil's Olympic angst has increased since Argentina won gold in Beijing four years ago and the prospect of taking the top prize previously held by their arch rivals, who failed to qualify for the London Games, has only increased the motivation in Menezes's squad.

Brazil are unbeaten in their five matches, scoring three times in each game to take their tally to 15 goals en route to the final.

The pick of the bunch have been Chelsea's new playmaker Oscar, Santos striker Neymar and Internacional forward Leandro Damiao, who struck twice in the semi-final win over South Korea.

With that trio in such inspired form, Menezes has been able to give only cameo roles to top-class talents like Porto striker Hulk and AC Milan forward Alexandre Pato, while Manchester United target Lucas Moura has often failed to get off the bench.

But Menezes knows the dangers of allowing his much-praised players to rest on their laurels against a Mexico side going for a first gold in their maiden Olympic final.

"Mexico have prepared well. Their under-23 side played in the Copa America and the Pan-American Games. Now they have added their three over-aged players (Jose Corona, Carlos Salcido and Oribe Peralta) they look very strong.

"The players are very calm, not over-euphoric about being in the final.

"But our team should be congratulated, they have come a long way since May when they were nowhere and now they are in an Olympic final.

"It has been 24 years since Brazil have been in the final, which shows how difficult it is to get there."

Real Madrid defender Marcelo summed up the desire within Brazil's ranks as he revealed the desire to win gold has consumed every member of the squad since the first day of their Olympic preparations.

"We have all been thinking about the gold medal since July 9," Marcelo said. "We want gold, the crowd also wants gold and everyone in Brazil wants it. We are going to fight to win.

"We are going to leave our skin on the pitch to defend our country."

Mexico, 3-1 winners against Japan in the semi-finals, have never won a football medal at the Games before.

They are guaranteed at least silver this time, but coach Luis Fernando Tena, who has concerns over Giovani dos Santos after the Tottenham forward suffered a leg injury against Japan, isn't satisfied with that.

"I understand the happiness of Mexico, which is a footballing country," Tena said. "They must be partying back there."

"This is special, this is emotional, but the most important is yet to come."

Comments
Topics mentioned in this article
Football Mexico Brazil Neymar Chelsea Olympics 2012
Get the latest updates on ICC T20 Worldcup 2022 and CWG 2022 check out the Schedule, Live Score and Medals Tally. Like us on Facebook or follow us on Twitter for more sports updates. You can also download the NDTV Cricket app for Android or iOS.