Brazil easily defeated New Zealand 3-0 on Wednesday despite resting some regular starters for the quarterfinals of the men's Olympic football tournament. 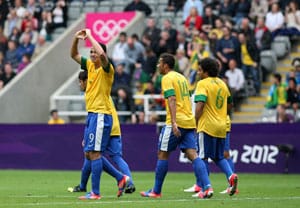 Brazil easily defeated New Zealand 3-0 on Wednesday despite resting some regular starters for the quarterfinals of the men's Olympic football tournament.

Already in the next round, Brazil earned the comfortable win with goals by Danilo in the 23rd minute, Leandro Damiao in the 29th and Sandro in the 52nd.

The result eliminated New Zealand, which needed to win to have any chance of advancing from Group C.

Brazil won the group with nine points from three matches, while New Zealand exited with one point from a draw with Egypt, which advanced after beating Belarus 3-1 to finish with four points. Belarus ended with three.

Brazil played a man down from the 76th after Alex Sandro received his second yellow card of the match for diving inside the penalty area.

Trying to win its first Olympic gold in football, Brazil will play the quarterfinals against the second-place team in Group D - either Japan, Honduras or Morocco. The group will be decided later on Wednesday.

The Olympic tournament is the only significant football competition Brazil hasn't won. It earned silver in 1984 and 1988, and bronze in 1996 and 2008.

The Brazilians controlled possession from the start and moved the ball around while patiently awaiting for its chances up front.

"I really liked the way the team played," Brazil coach Mano Menezes said. "We did a good job keeping the ball, we didn't rush the plays and that was important, the plays came naturally."

The first goal came after a give-and-goal play between Damiao and Danilo, who received the ball near the penalty spot and easily sent it past New Zealand goalkeeper Michael O'Keeffe.

Damiao added the second from the six-meter line, finding the open net after a low cross by Alex Sandro. Real Madrid left back Marcelo started the play with a backheel pass to Alex Sandro inside the box.

Marcelo also took the left-side free kick that led to Sandro's goal from near the far post. The ball crossed the area behind the defenders and the Tottenham midfielder easily found the net.

Menezes took the opportunity to rest some regular starters and give playing time to some of reserves. He made five changes from the team that beat Belarus 1-0 on Sunday, leaving out Hulk, Alexandre Pato, Oscar, Romulo and goalkeeper Neto. Gabriel, Lucas, Leandro Damiao, Danilo and Alex Sandro got to play.

"I liked how the players came into the match and kept the team playing at a high level," Menezes said. "It shows we have a quality group of players."

Playmaker Paulo Henrique Ganso came off the bench in the first two matches and was expected to play on Wednesday but didn't fully recover in time from a left thigh injury. Exams will be conducted to see how serious the injury is.

New Zealand's only significant chance was an 86th-minute shot by Michael McGlinchey that was deflected in front of the net. It threatened occasionally on set pieces.

"It was very difficult coming into this game knowing that we had to win against a top team like Brazil," New Zealand coach Neil Emblen said. "We just have to learn from this experience."

New Zealand leaves the competition after scoring only one goal and unable to win its first match in an Olympic or World Cup tournament. This is the team's second consecutive time participating in the Olympics. It has also played in two World Cups, in 1982 and 2010.

Brazil beat New Zealand 5-0 in the group stage four years ago in Beijing.

Comments
Topics mentioned in this article
Football Brazil Olympics 2012
Get the latest updates on ICC T20 Worldcup 2022 and CWG 2022 check out the Schedule, Live Score and Medals Tally. Like us on Facebook or follow us on Twitter for more sports updates. You can also download the NDTV Cricket app for Android or iOS.