Germany successfully defended their eventing team Olympic title on Tuesday as hosts Great Britain fought off New Zealand for silver in a tense conclusion to the final jumping session. 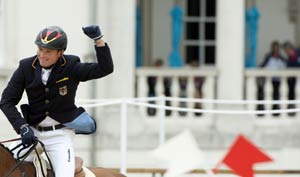 Germany successfully defended their eventing team Olympic title on Tuesday as hosts Great Britain fought off New Zealand for silver in a tense conclusion to the final jumping session.

In front of a packed stand at Greenwich Park, world champion Michael Jung's clear round, after equally faultless displays from teammates Dirk Schrade and Sandra Auffrath, gave the 2008 winners an unbeatable lead with 13 riders still to jump.

Jung, celebrating his 30th birthday, said he had not been aware of the significance of a perfect round before entering the ring.

The reigning world and European champion added: "I am really proud and there will be a party later."

The home favourites duly nabbed it when Todd knocked a fence down while Britain's anchor, Tina Cook, went clear to the delight of the partisan supporters who included Prince William and wife Kate, Prince Harry and former prime minister John Major.

"Gold would have been brilliant, silver's fantastic," Cook told the BBC.

Germany, favourites to prevail after holding the lead after the opening dressage and Monday's cross-country, finished with a total of 133.70 points, with Britain on 138.20 and New Zealand 144.40.

Cook, whose horse Miners Frolic almost died of colic last year, added: "My focus was trying to get a clear round, it was so tight at the top.

"The way my horse has come back it's almost like a fairytale...The vets managed to keep him alive, and here we are!"

Phillips, on her Olympic debut, had excelled in Monday's cross-country when she was one of only nine riders to go clear, but had a fence down in the ring.

"It was my fault," she conceded. "I messed up. He (High Kingdom) is a good jumper, he couldn't get out of where I put him.

"He lost both front shoes in the cross country yesterday, so to come out and do anything for me today was incredible."

The medals were presented by Phillips' mother Princess Anne, who competed at Montreal in 1976. Zara's father, Mark Phillips, was a member of the last British eventing team to win gold, at Munich four years earlier.

"The team came here hoping for a medal, yes gold would have been great, but we have to be very happy with a bronze," said Todd, who won individual gold in Los Angeles 1984 and again in Seoul four years later.

The USA were out of sorts at London 2012, trailing in seventh. Sweden took fourth ahead of Ireland with Australia in sixth.

The action continues at Greenwich later Tuesday when the individual three-day eventing title will be decided.

Comments
Topics mentioned in this article
Equestrian Andy Murray Tennis Germany Olympics 2012
Get the latest updates on IPL 2021, IPL Points Table , IPL Schedule 2021 , live score . Like us on Facebook or follow us on Twitter for more sports updates. You can also download the NDTV Cricket app for Android or iOS.