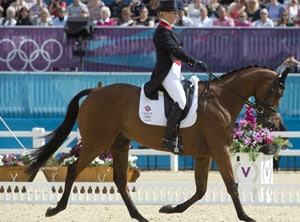 Phillips was denied the chance to compete at Athens 2004 and Beijing 2008 after her horse Toytown succumbed to injury.

But the 2006 world eventing champion finally made it at the third attempt, with her new horse, High Kingdom.

Phillips, taking part in the dressage at Greenwich Park, is following in the footsteps of her mother who competed at Montreal in 1976.

After her four-minute routine the judges awarded her a score of 46.10, putting her in the top ten in the individual eventing competition with Britain placed provisional third.

"It's incredible to be selected for the team and to be here at home in London is an amazing feeling and I just want to do my best for the team," she said.

"The Olympics is the greatest show on Earth and it is incredible to be here and to be competing for my country."

On her horse's performance she added: "This was High Kingdom's second biggest test, after the Burleigh Horse Trials, he's only getting better."

"Although he's inexperienced he's coped with the crowds well. He is a chilled character."

She is now looking forward to the second leg of the eventing competition, the cross country, on Monday.

"He's a good jumper, quick to turn and he's bored with dressage now and wants to get out there.

"Cross-country is our strongest phase so we hope we can improve our score."

Great Britain are seeking their first equestrian gold since Munich 1972 with Mark Phillips, Zara's father, who is at London 2012 as manager of the United States squad, on the team.

Comments
Topics mentioned in this article
Equestrian Olympics 2012 Stephen Fleming Daniel Vettori AFC Wimbledon Roger Federer
Get the latest updates on IPL 2021, IPL Points Table , IPL Schedule 2021 , live score . Like us on Facebook or follow us on Twitter for more sports updates. You can also download the NDTV Cricket app for Android or iOS.