Britain has beaten the Netherlands in a jumpoff for the gold medal in team show jumping at the London Games, its first gold in that equestrian discipline in 60 years. 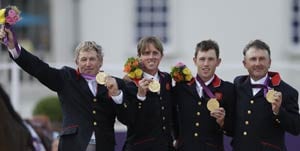 Britain has beaten the Netherlands in a jumpoff for the gold medal in team show jumping at the London Games, its first gold in that equestrian discipline in 60 years.

Three members of Britain's four-man team - Nick Skelton, Ben Maher and Peter Charles - rode clear rounds in the jumpoff to give the host team the victory. The fourth member was Scott Brash.

Skelton, 54, broke his neck in 2000 but returned to the sport two years later. Charles previously competed in two Olympics for Ireland but changed his citizenship to British in 2007.

Competing in his fifth Olympics, Skelton said he was more nervous watching his teammates than riding himself.

"I wish I could have gone four times," he said. "They've done great. I've got a wonderful horse, wonderful owners, it's a dream come true."

The last time Britain won an Olympic gold medal in show jumping was at Helsinki in 1952.

Saudi Arabia held the lead with only one penalty point after the first round and four countries, including Britain and the Netherlands, were tied for second with four faults each.

The height of obstacles and the striding between fence combinations were made more difficult for Monday's final round, resulting in more dropped fence rails and a wide swing in the results.

The British and Dutch had 8 faults each to put them into the jumpoff Monday. Saudi Arabia took bronze with 14, followed by Switzerland (16), Canada (26) and the United States and Sweden (28 points each).

The team competition also served as a qualifier for the individual show jumping event when the top 35 riders out of 75 entries advanced. The final individual round will be held Wednesday, when medals will be presented.

Skelton and Maikel van der Vleuten and Marc Houtzager, both of the Netherlands, are tied for first with no faults going into Wednesday's round. Edwina Tops-Alexander of Australia, Prince Abdullah Al Saud of Saudi Arabia and Ben Maher of Britain are tied for second with four faults each.

American Rich Fellers and Canadian Ian Millar are among a group of riders tied for 11th with 8 faults each.

Comments
Topics mentioned in this article
Equestrian Mexico Netherlands Canada Belarus France Portugal Andy Murray Tennis Olympics 2012
Get the latest updates on ICC T20 Worldcup 2022 and CWG 2022 check out the Schedule, Live Score and Medals Tally. Like us on Facebook or follow us on Twitter for more sports updates. You can also download the NDTV Cricket app for Android or iOS.