The Netherlands beat world champions Argentina 2-0 to retain their women's Olympic hockey title Friday, raising the prospect of a Dutch double with their men set for a gold medal match against Germany. 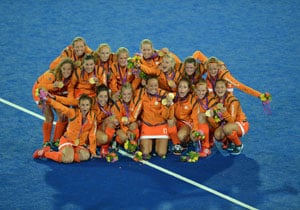 The Netherlands beat world champions Argentina 2-0 to retain their women's Olympic hockey title Friday, raising the prospect of a Dutch double with their men set for a gold medal match against Germany.

The reigning champions took a long time to break down their nearest rivals, but eventually were a little more incisive in front of goal, thanks to their captain Maartje Paumen.

Surprisingly Paumen had not scored at all in the earlier matches, saying that she was saving her goals for the final -- and she delivered magnificently.

The first came when Carlien Dirkse van den Heuvel's shot was too fierce to control and Paumen pounced on the rebound with a predator's instinct, undeterred either by the angle or the fact that she was leaning backwards.

The second was quite different -- a brilliant shot from the edge of the penalty circle which needed to find the top corner to avoid the goalkeeper's dive. It did just that.

"We saved the best to last. It was like we were playing in Holland -- the whole crowd was orange," said Paumen, who now has a record 14 goals in all Olympics.

"Every game we look at a video and watch how our opponents defend from corners and then choose our tactics accordingly... Winning four years ago in Beijing was amazing, but this was just as good."

It took fully 45 minutes to make the first breach in Argentina's defence, and 53 minutes to make the second. This meant that the Dutch knew, if they continued to pass the ball with control in a match with few openings, they would retain the Olympic title.

Argentina never gave up, even if there were signs of frustration towards the end, when Silvina d'Elia had to leave the field for two minutes after getting a green card for pushing.

This was unsurprising. It was after all the Netherlands who beat Argentina at both the Athens and Beijing Olympics too, in the semi-finals. The Dutch have now won medals in four consecutive Olympics.

The result also means Argentina captain Luciana Aymar, 35, wins her fourth straight Olympic hockey medal but was unable to claim her first gold -- the only missing major title of her career.

Aymar was at the centre of her country's best efforts early on, but became less influential as the match progressed. One of Argentina's least likely heroines was Florencia Mutio, a late choice goalkeeper, who made some good saves and one brilliant one, right at the end of the first half, to keep the world champions well in contention.

But gradually the Netherlands' dominance increased, even when they could not carve out real chances. Although they have had more field goal attempts than any other team in these Olympics, both goals this time came from penalty corners.

These were nevertheless the result of cumulative pressure, with some fast running and skilful passing, with Naomi van As particularly dangerous in the first half, and Maartje Goderie in the second.

This persistent, self-confident performance by the Dutch women may help their men as they take on the tough task on Saturday of playing Germany, the world champions, in the other final.

Earlier Great Britain's women equalled their best Olympic finish when they beat New Zealand 3-1 and earned a bronze medal -- something they last achieved 20 years ago in Barcelona.

It did however it take a long time to break down the fiercely motivated Kiwis who were as close to a women's Olympic hockey medal as they have ever been and already certain of their best Olympic finish.

Britain's goals, from Alex Dawson, Crista Cullen and Sarah Thomas, all came from penalty corners, as befitting a team with the best conversion rate in the tournament, of more than 40 percent.

And all of them were taken by Kate Walsh, the British captain who fractured her jaw only a week ago and yet came back to play an influential part.

"I didn't think I would be able to play when that first happened," she said. "But the surgeon was very confident. I think it's going to hit me in a few weeks time what a crazy fortnight it's been."

Comments
Topics mentioned in this article
Hockey Olympics 2012 Argentina
Get the latest updates on ICC T20 Worldcup 2022 and CWG 2022 check out the Schedule, Live Score and Medals Tally. Like us on Facebook or follow us on Twitter for more sports updates. You can also download the NDTV Cricket app for Android or iOS.