Olympic bronze medalist Tom Daley believes China will no longer be the dominant force of diving by the next Games in Rio de Janeiro. 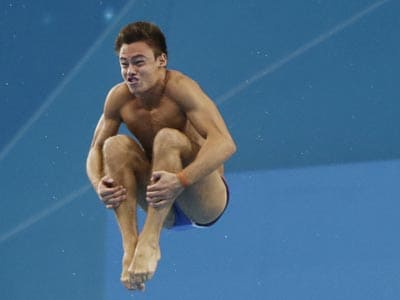 Olympic bronze medalist Tom Daley believes China will no longer be the dominant force of diving by the next Games in Rio de Janeiro.

China won six of the eight titles on offer in London but failed to secure their target of a clean sweep, as they did at last year's world championships.

In Beijing only Australia's Matthew Mitcham denied them a sweep by winning the 10-metre platform, and again in London favourite Qiu Bo suffered one of the shocks of the Games when he lost out to American David Boudia.

"The Chinese domination is slowly coming to an end. Qiu Bo this year has been unstoppable and that's why it was such a surprise for him not to win. That was a big shock," said Daley, 18, who took bronze on the 10-metre platform.

"Definitely the Chinese divers don't necessarily like pressure. If you constantly apply that pressure they sometimes falter. That's what happened in Rome in 2009 when I won the world championships.

"With myself and David (Boudia) challenging him (Qiu) that is great for the sport.

"Hopefully the Chinese domination will go away into the future.

Daley believes he will be a contender for gold in Rio and beyond.

"I've already been doing my dives for two years and going into Rio six years and then the one after that, wherever it may be, I will have been doing them for 10 years.

"Hopefully after 10 years of doing the same dives I should be pretty consistent and accurate."

Comments
Topics mentioned in this article
Diving Olympics 2012
Get the latest updates on ICC T20 Worldcup 2022 and CWG 2022 check out the Schedule, Live Score and Medals Tally. Like us on Facebook or follow us on Twitter for more sports updates. You can also download the NDTV Cricket app for Android or iOS.