The London 2012 organisers defended Saturday the playing of loud music in the Olympic Stadium while athletes are competing. 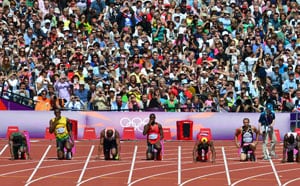 The London 2012 organisers defended Saturday the playing of loud music in the Olympic Stadium while athletes are competing.

Some fans and sports commentators are dismayed at the music being pumped out through the stadium's speakers during events, thinking it disrespectful to both the athletes and the 80,000 people watching the action.

Rock and pop tunes were played throughout the women's 10,000m final on Friday, the longest event on the track.

But the Games organisers said the idea had been approved by the sport's IAAF governing body and had been greeted with a positive response so far.

"In terms of the music, I think we have the level right," London 2012 spokeswoman Jackie Brock-Doyle told reporters.

"We have actually had loads of really positive feedback about the atmosphere and the music in the venue."

However, if "people are not liking it then, of course, we will have a look at it."

Brock-Doyle said that as in other sports at the London Olympics, educational films were shown on the giant screens to inform people about what they were watching.

"We've looked across all sports, actually, and done what we think is quite a creative look at all presentations.

"We've added a lot of music to it and a bit more colour. So we have consciously gone out to ramp up the sports presentation."

The plans had been signed off by the federations concerned, she said.

Paul Hayward, chief sports writer at The Daily Telegraph newspaper, was among those taking to social media to decry the situation.

"Makes the athletes bit-part players in a show, bombards their ears in races and suggests crowd can't appreciate the sport," he tweeted.

"Manages to insult athletes and crowd at the same time. Quite a feat."

Patrick Baumann, secretary-general of the international basketball federation FIBA, said he thought the music in the Olympic Stadium was loud but backed its use, saying thumping tunes added to an event's atmosphere.

"I maybe agree that it is loud but that is a personal view," he told reporters.

"The spectators really love it. It does not bother the players and the athletes; they are playing the game.

"There's always a dead moment during a sports event.

"It is absolutely fair to deliver to the spectators a moment of entertainment which is continuous.

"They like singing English songs which are known worldwide... It brings more to their experience. It has been excellent -- and certainly better than what we had in the past."

"I love it. You can't hear it," said the four-time women's basketball gold medallist.

"It entertains the crowd, and we are very used to it in the States," she said.