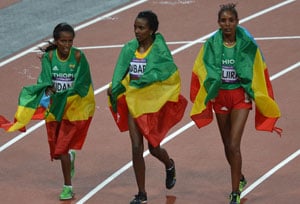 Dibaba, a seven-time world champion and also Olympic champion and world record holder in the 5000m, clocked 30min 20.75sec to finish ahead of Kenyans Sally Kipyego (30:26.37) and Vivian Cheruiyot (30:30.44), the reigning world champion.

Dibaba's achievement meant she matched her cousin Derartu Tulu in becoming the second woman to win two Olympic gold medals in the women's 10,000m. It also meant that Kenya have still never won the event.

"I have never been happier," beamed Dibaba. "I was not even that happy after the Beijing Olympics.

Cheruiyot said she was not too disappointed with her bronze-medal showing.

"It was good because I did my personal best and I am happy because it's my first medal in the Olympics so I'm not disappointed at all," she said.

Silver medallist Kipyego, who also ran a personal best, said the race had been very tactical, but admitted that she had no gas in the tank to stay with Dibaba at the end.

"It's always a very tactical race when you come to the Olympics but for me I wanted to be as smooth as I can," she said.

"At the end I was just hanging on for dear life and I would be lying if I said that I had any more energy to run with her (Dibaba).

"She was quick and she took off and when I saw that I didn't have anything to respond. I was just thinking if I go with her I might not finish this race."

It was a welcome return to form for the 26-year-old Dibaba, who missed the world cross-country champs in Jordan and the world championships in Berlin in 2009 because of nagging injuries.

The Japanese trio of runners took their customary lead through the first 10 circuits of the 25-lap race before the Kenyans took over the pace making.

Joyce Chepkirui, the Kenyan cross-country champion, and reigning world silver medallist Kipyego upped the tempo as the field began to string out as they hit 5000m in 15:32.06.

Ethiopian Worknesh Kidane, a record 21-time medallist at the world cross-country championships including gold medallist in 2003, took the lead through the tenth lap and was the perfect foil for Dibaba.

In ideal running conditions, with a temperature of 17 degrees Celsius (64 Fahrenheit) and a slight breeze, the lead chopped and changed between Kidane and Chepkirui, the Ethiopian kicking with eight laps to go.

Dibaba was pulled along on Kidane's coattails with Cheruiyot and Kipyego as Chepkirui fell off the pace.

The quartet kicked free of the chasers to set up a battle royale in the last three laps.

Kipyego led with 800 metres to go as Dibaba eased past her fading teammate Kidane and produced a deadly spurt of acceleration at 600m to build up a convincing 40-metre lead over a Kenyan duo left powerless to respond.

Dibaba hit the back straight clear, her eyes flicking to the big screen in front of her before she crossed the line with arms raised.

Kipyego kicked enough to claim silver ahead of the flagging Cheruiyot, who will now look to make her mark in this Olympics in the 5000m.

Comments
Topics mentioned in this article
Olympics 2012 Athletics
Get the latest updates on India vs South Africa and check out  Schedule, Results and Live Score. Like us on Facebook or follow us on Twitter for more sports updates. You can also download the NDTV Cricket app for Android or iOS.