Latvian powerhouse Maris Strombergs and hip-hop loving Colombian Mariana Pajon stormed to the the men's and women's BMX golds as Britain's medal favourites failed to shine at the VeloPark on Friday. 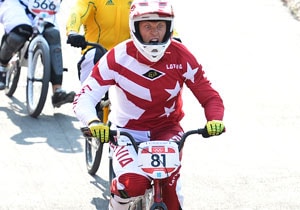 Latvian powerhouse Maris Strombergs and hip-hop loving Colombian Mariana Pajon stormed to the the men's and women's BMX golds as Britain's medal favourites failed to shine at the VeloPark on Friday.

Strombergs, 25, claimed the maiden Olympic men's BMX gold when the sport made its debut in Beijing.

Despite coming up against a handful of younger rivals who had shown their mettle in the unforgiving quarter-finals and semi-finals, the Latvian stepped up when it mattered most.

A two-time world champion known as 'The Machine', Strombergs shot off the eight-metre high ramp and quickly built a slight lead on the rest of the eight-man field.

Australia's world champion Sam Willoughby, 20, was hot on his heels but with several jumps and berms to negotiate, neither rider was free of danger.

British gold medal hope Liam Phillips came down on the penultimate berm and struggled to rejoin the field after he could not clip his foot back on to his pedal. He eventually finished eighth.

Willoughby was the only rider likely to threaten Strombergs, but the Latvian held on to cross the line unchallenged.

"It's amazing. I still can't believe it. I need a few more minutes, man," said Strombergs, who showed once again that a fast start can provide both a crucial lead and reduce the chances of danger.

"When I came first out of the first turn, I was really confident in myself and my abilities on the track. I know what I am capable of and I know that if I put everything together with a good lap, no one will come past me."

Silver medallist Willoughby said some early race nerves had been settled after a talk with his father in Australia.

"He always puts it back into football AFL (Australian rules) terms, because he is a footie fanatic," said Willoughby.

"He sort of said to me it's like you're playing in a grand final. The first five minutes everyone makes mistakes, everyone's a wreck and he told me that's what yesterday was. Then you get it together and I did today."

"I fell twice yesterday, but I never lost faith that I could do it," said Oquendo.

The 6,000 supporters at the VeloPark included a sizeable Colombian contingent and they were treat to the sight of Pajon powering to gold in style ahead of New Zealand's Sarah Walker and Dutch teenager Laura Smulders, as British hope Shanaze Reade settled for sixth.

Pajon, who loves hip-hop music and challenging the BMX boys at their own game, burst down the start ramp to seize the lead from the outset on the 440m women's circuit.

"My whole life I am trying to win this," said the 20-year-old Pajon, who won the world title in Cophenhagen in 2011. "I want to win it again. I want go out the gate and win it again. It's unbelievable."

After a nervous start Walker put herself in medal contention. When she saw Pajon alongside her going into the first corner, she stuck right with the Colombian.

"I just stuck outside her and did what I could," said Walker. "She rode incredibly today and I was just happy to be in behind her down that last straight."

Smulders had trained with Walker for a week leading up the Games. And that proved a smart move for the 18-year-old from Nijmegen, who had initially hoped to compete for a first Olympic medal at Rio 2016.

"I was actually aiming for Rio (de Janeiro) but now I already have bronze. Well, let's go for gold then (in Rio)."

Comments
Topics mentioned in this article
Olympics 2012 Maria Sharapova Cycling
Get the latest updates on ICC T20 Worldcup 2022 and CWG 2022 check out the Schedule, Live Score and Medals Tally. Like us on Facebook or follow us on Twitter for more sports updates. You can also download the NDTV Cricket app for Android or iOS.