A Japanese track cyclist from the no-go zone around the crippled Fukushima nuclear plant is helping unite a community scattered by last year's quake-tsunami disaster as they cheer him on in the London Olympics. 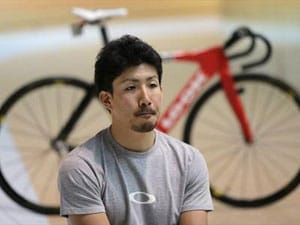 A Japanese track cyclist from the no-go zone around the crippled Fukushima nuclear plant is helping unite a community scattered by last year's quake-tsunami disaster as they cheer him on in the London Olympics.

Refugees gathered in the city of Tsukuba on Friday to watch Kazunari Watanabe in the team sprint and will get behind their native son again on Tuesday when he takes part in the Keirin event.

"I've raced bearing in mind how everyone felt about me. I want to repay the courage they have given me," Watanabe told Japanese media after his first race, in which his three-man team finished eighth, well out of the medals.

The 28-year-old's family -- including his wife, parents, and grandmother -- now live in different locations across Japan after the devastating 9.0-magnitude earthquake and tsunami in March 2011 which triggered the worst nuclear accident since Chernobyl.

The cyclist's mother, Tomoko, has said she can "see in everyone a feeling that they have grown into one" because of her son.

Hopes are high that Watanabe can grab a medal on Tuesday in the Keirin, an event which originated in Japan where the competitors are paced behind a motorcycle before sprinting for victory.

In the world track cycling championships in Melbourne in April he placed fifth.

Junko Nakamura, who fled the disaster zone with her family last year, was among dozens of people who watched a delayed broadcast of Thursday's Olympic cycling races on a big television set under a tent in a park.

"I hope he does well in London and wins a gold medal to bring us all bright hope," said the 37-year-old, who has settled in Tsukuba, north of Tokyo, with her banker husband and two daughters.

"Isn't it wonderful that we can unite as one because of him. I will come to see his next race here too."

Nakamura is one of the roughly 7,000 people from Futaba, the cyclist's home town near the Fukushima Daiichi plant, who fled following the disaster.

The giant tsunami swamped the plant, sending reactors into meltdown and scattering radiation across the surrounding area -- the worst atomic crisis in a generation.

A total of about 19,000 people were left dead or missing by the tsunami, and more than 160,000 are still displaced from their homes in the Fukushima region because of high radiation levels and the devastation wrought by the disaster.

It remains uncertain whether they will ever be able to return, with experts saying it could be decades before the area is deemed safe.

Tsukuba is a relatively new city with universities and scientific laboratories which draw newcomers from around Japan.

Earlier this month, about 200 locals wrote messages of support on a huge Japanese flag to help cheer Watanabe on.

"I have watched different sports in the past Olympics, but not cycling," she said. I want to come back and see his courage. It will be moving if he wins a medal."

Junya Kataoka, who organised the big screen viewing, said he wanted to help refugees adjust to their new life.

"Instead of clearing debris from the disaster area, we are helping refugees take mental care of themselves and communicate with local people," he said.

Comments
Topics mentioned in this article
Barcelona Cycling Olympics 2012
Get the latest updates on ICC T20 Worldcup 2022 and CWG 2022 check out the Schedule, Live Score and Medals Tally. Like us on Facebook or follow us on Twitter for more sports updates. You can also download the NDTV Cricket app for Android or iOS.