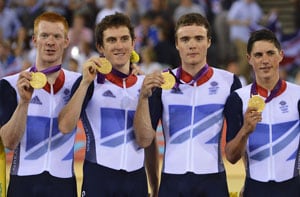 Australia finished second in 3:54.581 to win silver while New Zealand won the bronze after beating Russia in the battle for third place.

A day after the men's sprint team of Philip Hindes, Jason Kenny and Chris Hoy defended their team sprint crown from Beijing in record time, Britain's team pursuit quartet lived up to expectations to keep the crowd in raptures.

Ed Clancy, Steven Burke, Peter Kennaugh and Geraint Thomas had combined to clock a world record of 3min 52.499sec for the 16-lap, 4km event on Thursday.

The same quartet underlined their gold medal credentials again by again dipping under the 3:53 mark in 3:52.743 to top the times in Friday's first round and book a final appearance with the Aussies.

In the final Australia were never out of the match, keeping their deficit to Clancy, Burke, Kennaugh and Thomas to within a second.

However their bid for gold suffered a blow when they lost Glenn O'Shea with several laps to go.

Britain's feat means they become the first team to defend the Olympic title in the event since West Germany took a second successive Olympic team pursuit gold in 1976.

It also handed Thomas, a successful rider on the road, and Clancy second consecutive golds in the event. They were part of the team in Beijing.

It was the eighth world record and sixth by a British team or rider in two days of competition at the London velodrome.