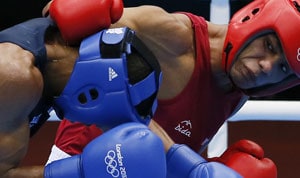 India's Vikas Krishan kept alive hopes for an Olympic medal in boxing as he won the pre-quarterfinal bout to enter the last eight of the men's 69 kg category here at ExCel London Friday.

The 20-year-old beat American Errol Spence with an overall score of 13-11.

The Indian pugilist took off well. Aided with some sharp jabs at his American opponent he took a lead of 4-2 in the first round.

Spence, 22, came back well with a flurry of punches into Vikas' body. The Bhiwani boxer responded well and punched Spence on his forehead twice.

With some aggressive body shots the 2011 US national champion fought back into the match with a 6-5 win in the second round with the overall score reading 9-8 in favour of Vikas.

The final round was completely dominated by Spence whose destructive punches tired out the Bhiwani boxer. Vikas missed shots as he wearily punched in the air and looked completely out of steam.

Vikas, a 2011 World Championship bronze medallist, got a few accurate punches on the aggressive American who got the better of Vikas with a set of final punches and appeared confident of a win after the final bell rang.

However, the third round score read 4-3 for the Indian and a sobbing Spence could not believe the result.

If Vikas wins his next bout against Russian Andrey Zamkovoy Tuesday India will be assured of at least another bronze medal.

Comments
Topics mentioned in this article
Boxing Olympics 2012 India
Get the latest updates on India vs South Africa and check out  Schedule, Results and Live Score. Like us on Facebook or follow us on Twitter for more sports updates. You can also download the NDTV Cricket app for Android or iOS.