London 2012 boxing: India's Manoj Kumar out of the Olympics

Indian boxer Manoj Kumar bowed out of the 2012 London Olympics after he lost his 64kg pre-quarterfinal bout to Great Britain's Tom Stalker at the Excel Arena here Saturday. 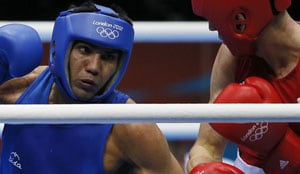 Indian boxer Manoj Kumar bowed out of the 2012 London Olympics after he lost his 64kg pre-quarterfinal bout to Great Britain's Tom Stalker, the world number 1, at the Excel Arena here Saturday.

The 25-year-old Indian, a Commonwealth Games gold medallist (light welterweight), went down 20-16 in a bout that was dominated by the local hero, who had received a first round bye.

Stalker, also a Commonwealth Games gold medallist (light weight), was in his primeform right from the start, and opened up a huge lead in the first round winning it 7-4. Manoj struggled and adopted a defensive strategy.

The second round also continued in the same fashion as Stalker's flurry of punches rattled the Indian. Stalker increased his lead winning the second round 9-4.

Going into the third round, the Indian was trailing 9-16. Manoj went all out in the decider and showed great courage. But Stalker knowing that he enjoys a huge lead
played it safe, dancing around the ring and hardly let his guard down.

But Manoj was in no mood to give in and landed a few strong blows that help him win the third round 7-4 but it came too late.

Manoj was nowhere near his performance in the first round, when he was in complete control against Serdar Hudayberdiyev of Turkmenistan. Manoj had won the bout 13-7.

Manoj is the fifth boxer after Shiva Thapa, Jai Bhagwan, Vikas Krishan and Sumit Sangwan to crash out of the Games.

Devendro Singh and Vijender Singh are in the quarterfinals and just a bout away from ensuring an Olympic medal for India.