India's Laishram Devendro Singh marched into the last eight of the men's 49kg boxing event at the London Olympics with another dominating performance that saw him overcome Serdamba Purevdorj of Mongolia 16-11 in the men's pre-quarterfinals here Saturday. 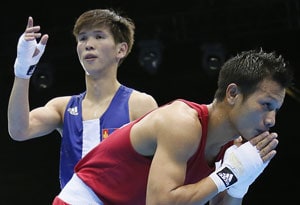 India's Laishram Devendro Singh marched into the last eight of the men's 49kg boxing event at the London Olympics with another dominating performance that saw him overcome Serdamba Purevdorj of Mongolia 16-11 in the men's pre-quarterfinals here Saturday.

Devendro had won his first round bout in an emphatic style with the referee stopping contest.

Going into the pre-quarterfinal bout, the Indian had a mountain to climb against Purevdorj, a former World Champion and Beijing Games silver medallist.

The 20-year-old from Manipur showed no signs of nerves as he came out swinging in the first round. The Mongolian was taken aback by the barrage of punches which came his way as the Indian narrowly edged out the first round 4-3.

The second round started off in a similar fashion as Devendro went on the attack with the Mongolian having no answer.

Purevdorj, a former world champion, was stunned by the Indian's attack and looked short of ideas.

Devendro further strengthened his stranglehold in the bout by landing a left-hook that sent his opponent reeling. The referee stopped the bout and gave the Mongolian a standing eight count.

The third round too went the same way. A tired Purevdorj showed no intensity in attack and hardly troubled the Indian. Devendro though changed his style and adopted more defensive tactics.

The Mongolian landed a couple of punches but that was never enough as the diminutive Indian took the round 8-6.

Devendro will now face Paddy Barnes of Ireland in the quarters Wednesday. Barnes is a 2008 Beijing Games bronze medallist and the 2010 Commonwealth Games champion.