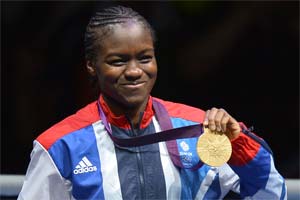 After losing May's world championships flyweight final to Ren, Adams controlled the Olympic gold-medal bout from the first bell and attacked Ren, who has won the last three world titles.

The Briton made a bright start, working her jab effectively, to take the first round 4-2 at London's ExCel Arena.

The home favourite had the London crowd chanting 'Nicola!' when she pinned the world champion to the ropes at the start of the second, then floored Ren with an upper-cut midway through the round to extend her lead to 9-4.

Ren responded with a fiery start to the third, a fast combination had Adams boxed in a corner, but the Briton held her own and picked up points to convincingly win the third 5-1 for an overall 14-5 lead.

The fourth round ended 2-2, but Adams was punching the air and celebrating with crowd long before the referee raised her arm as the victor to crown her Olympic champion.

"It is a dream come true. I am so happy and overwhelmed with joy right now. I have wanted this all my life and I have done it," said Adams.

"The feeling when I step on the podium will be amazing and taking the gold medal home to Leeds will be special."

Having lost Wednesday's semi-final bouts, Marlen Esparza of the United States and India's M.C. Mary Kom were both awarded bronze medals as women's boxing made its Olympic debut in London.

Comments
Topics mentioned in this article
Boxing Olympics 2012
Get the latest updates on India vs South Africa and check out  Schedule, Results and Live Score. Like us on Facebook or follow us on Twitter for more sports updates. You can also download the NDTV Cricket app for Android or iOS.