Saina Nehwal took the Olympic women's singles badminton bronze in rather disappointing circumstances as her Chinese opponent Xin Wang withdrew with injury. The Chinese was leading Saina 21-18, 1-0 before a knee injury forced her retirement. 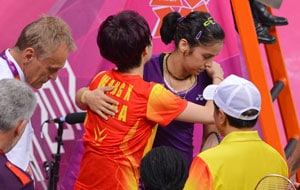 Saina Nehwal etched her name in India's sporting history winning the country's maiden medal from badminton and becoming the second Indian woman to stand on the podium after China's Xin Wang retired hurt from the bronze medal play-off in the women's singles event at the London Games here Saturday.

After the match, Saina said, "I have never won a match like this before. It was my dream to see the flag go up." (Read here)

Luck smiled on Saina who had lost the first game 18-21 and was trailing 0-1 in the second when the Chinese was forced to pull out with a right knee injury securing the third medal for India from the 2012 Games. (Read about Saina's spirit here)

However, the glamorous mixed doubles pair of Leander Paes and Sania Mirza went down 5-7, 6-7 (7-5) in the quarter finals against the top seeded Belarusian pair of Victoria Azarenka and Max Mirnyi to bring to an end India's fruitless tennis campaign.

In the ring, L. Devendro Singh became the second Indian boxer to enter the quarterfinals bringing some relief following last night's heartbreak when Vikas Krishan had to bow out from the pre-quarters hours after the authorities overturned the result of the men's 69 kg bout which featured the Indian against American Errol Spence.

Hours after Vikas was declared the winner of the bout 13-11, the competition jury of AIBA ruled on an American protest Friday night that Vikas committed nine holding fouls in the third and last round alone and also that the Indian had intentionally spit out his mouth guard in the second round.

In the badminton bronze-medal play-off, though fourth seed Saina took off well with exquisite defensive shots in the first game, the Chinese recuperated in no time to equalise at 5-all. (Saina's father's comments)

From thereon it was a Wang-dominated game all the way and the Indian could not match her pace making many errors. She made several poor line judgements conceding at least four points to the World No.2.

Wang, a former World No.1, constantly caught Saina on the backfoot and the Hyderabadi, looking nervous, could not pick her cross-court smashes nor her drops at the net.

However, Saina tried fighting back at the end of the first game after Wang reached game point (20-14). The Commonwealth Games gold medallist saved four game points to make it 18-20.

But a match point away, the Chinese made a heavy landing, while hitting a smash, and fell on the floor writhing in pain.

The referee called for medical time-out. The tournament doctor came in and tended to her knee. The World No.2 returned to the court with a heavily strapped right knee. Surprisingly, she immediately sealed the game smashing Saina's serve.

But despite winning the first point in the second game, she again dropped on the court in pain.

Saina went to comfort Wang, who had no choice but to retire as she could not carry on.

The match was awarded to Saina, who hugged her opponent becoming India's second woman to win an Olympic Medal after weightlifter Karnam Malleswari at the 2000 Sydney Olympics.

Sania's mentor and national coach Pullela Gopichand said she would have won anyway if the match had gone on in spite of her loss in the first game.

"It was unfortunate that Wang had to retire. I feel that Saina would have won anyway if the match would have gone on," said Gopichand.

"It is a great victory and this is huge for Indian badminton. Saina was shocked when she lost the first game. Nevertheless a win is a win," added Gopi Chand.

Boxer Devendro beat Mongolian Serdamba Purevdorj 16-11 in a men's pre-quarterfinal match of the 49-kg category at the ExCel Arena.

There was a disappointing news from track and field, where S Sudha finished 13th in heat 1 of the women's 3,000-metre steeplechase thus ending her participation in the Games. The Indian runner clocked 9:48.86.

At the Royal artillery Barrack range, Indian female trap shooter Shagun Chowdhury looked lackluster to take the 20th placed in the qualification round and miss out on a final berth.

In rowing, the team of Sandeep Kumar and Manjeet Singh got the 19th slot in the men's lightweight double sculls by competing the race in seven minutes and 8.39 seconds at the Eton Dorney lake.

Comments
Topics mentioned in this article
Badminton BA Matthews Olympics 2012 India Saina Nehwal
Get the latest updates on IPL 2021, IPL Points Table , IPL Schedule 2021 , live score . Like us on Facebook or follow us on Twitter for more sports updates. You can also download the NDTV Cricket app for Android or iOS.