Lin Dan of China became the first man to retain the Olympic badminton singles title after beating Malaysian archrival Lee Chong Wei in a final that lived up to the hype on Sunday. 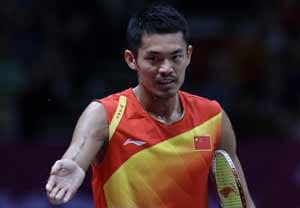 Lin Dan of China became the first man to retain the Olympic badminton singles title after beating Malaysian archrival Lee Chong Wei in a final that lived up to the hype on Sunday.

Lin, unquestionably the greatest player ever with his sixth Olympic and world title, won 15-21, 21-10, 21-19 to repeat his victory over Chong Wei in the Beijing Games final.

When Chong Wei's final shot landed long, Lin sprinted around Wembley Arena until he was tackled by his coaches. He didn't rip off his shirt as he did in Beijing, but he threw it into the crowd and saluted them.

Chong Wei slumped to the court, his hopes of winning Malaysia's first-ever Olympic gold ruined again. But of Malaysia's three silver medals, he now owns two of them as their most successful Olympian.

Chong Wei walked into the arena to a decidedly warmer reception than he received in Beijing, where he admitted he choked in the final.

What the final, expected to be the pair's last Olympic appearance, meant to them was soon apparent, with fist pumps early for points won, and grimaces for points lost.

Some of the rallies were eye-popping.

A Chong Wei crosscourt flick at the net over Lin's shoulder sent Lin scampering back. He scooped the shuttle over from laces-high and eventually won with a jump smash.

But he had trouble with his range, sending easy shots long, and yet another error gave Chong Wei the first game.

In the second, Lin finally tuned in, defended Chong Wei's best shots and watched the Malaysian begin piling up errors. Eventually, Chong Wei decided the score wasn't worth chasing and he let the shuttle go to save energy for the third game.

Chong Wei's decision paid off early. He scrambled and scraped ahead on Lin's errors. Chong Wei went 9-5 up but Lin protested and the point was correctly overturned by the umpire, as TV replays confirmed Chong Wei's shot was wide.

Chong Wei led 15-13 and 18-16 but each time Lin leveled lifting his game. Chong Wei led 19-18 but then he let the shuttle pass him, and it landed in. Lin earned match point with a beautifully weighted drop at the net and raised the tension by casually changing shuttles.

He nailed the last point and let the celebrations begin.

Comments
Topics mentioned in this article
Badminton Olympics 2012
Get the latest updates on ICC T20 Worldcup 2022 and CWG 2022 check out the Schedule, Live Score and Medals Tally. Like us on Facebook or follow us on Twitter for more sports updates. You can also download the NDTV Cricket app for Android or iOS.