Indian shuttler Parupalli Kashyap played his heart out before going down fighting to world number two Lee Chong Wei in a grueling quarterfinal of the men's singles event at the London Olympics. 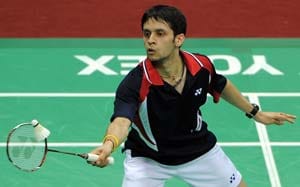 Indian shuttler Parupalli Kashyap played his heart out before going down fighting to world number two Lee Chong Wei in a grueling quarterfinal of the men's singles event at the London Olympics.

Kashyap dived, smashed, retrieved almost everything thrown at him but still could not stop the top seed Malaysian as he eked out a 21-19 21-11 victory to advance to the semi-finals at the Wembley Areana here.

In the first game, Kashyap dominated the show from the beginning and was dictating the pace of the game as he opened up a 11-8 lead at the interval.

But Chong Wei varied the pace of the rallies and clawed back to level the scores at 15-15. Kashyap matched his superior rival stroke by stroke and didn't give up and was leading 19-18.

But in the end, it was the experienced Malaysian who pocketed the game as he forced the Indian to commit errors and registered three quick points to edge past him.

In the second game, Chong Wei started dominating. He mixed his strokes beautifully and executed his smashes to perfection to floor Kashyap. He led 11-6 at the break.

The Indian showed some spark but in his pursuit to match the Malaysian's strokes, he ended up committing unforced errors. With Chong Wei gaining 10 game points at 20-10, Kashyap saved a couple of points but it was all over when his return went to the nets.

Parupalli Kashyap exceeded all expectations and created history of some sorts at least. Many of the heralded prospects in the Indian Olympic contingent did not rise up to the expectations but Kashyap showed that he was all geared up for the Games. Losing out after putting up an impressive fight against the world number 2, will definitely bode well for the Indian.

Comments
Topics mentioned in this article
Badminton India Tamim Iqbal West Indies Cricket Team Bangladesh Cricket Team World Cup 2011 Olympics 2012
Get the latest updates on India vs South Africa and check out  Schedule, Results and Live Score. Like us on Facebook or follow us on Twitter for more sports updates. You can also download the NDTV Cricket app for Android or iOS.