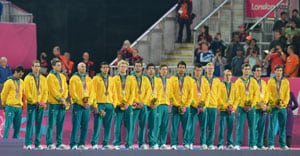 Recriminations have begun in Australia after they finished only 10th at the London Games, down from sixth in Beijing, with just seven golds for their worst victory tally in 20 years.

It was well below expectations, lagging the likes of Hungary and Italy, and a massive 22 gold medals behind traditional arch-rival Britain, the host nation.

Gillard led hundreds of family, friends and wellwishers in welcoming home the athletes and said they deserved praise.

"For those who have been quick to rush out with criticism, London 2012 has been a remarkable result by any measure," she said.

"Our nation is still in the top 10, still fighting, still striving.

"No matter what medal you're wearing around your neck today, or whether you're not wearing a medal at all, you are carrying the greatest of honours, you're Olympians," she added.

"What a day it was," he told the crowd, while also paying tribute to the sailing team, which picked up three gold medals and a silver.

"It was clearly the best performing team we've had in London," he said.

Australian Olympic boss John Coates has blamed administrators rather than athletes for the below-par effort, saying money was not the problem.

Comments
Topics mentioned in this article
Olympics 2012 Athletics Australia Cricket Team
Get the latest updates on ICC T20 Worldcup 2022 and CWG 2022 check out the Schedule, Live Score and Medals Tally. Like us on Facebook or follow us on Twitter for more sports updates. You can also download the NDTV Cricket app for Android or iOS.