Usain Bolt is targeting a spectacular send-off as the Olympic track and field competition draws to a close on Saturday with Jamaica aiming to seal their sprinting supremacy. 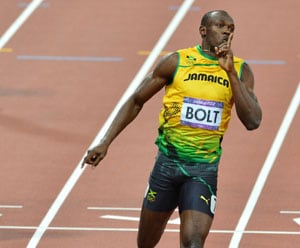 Usain Bolt is targeting a spectacular send-off as the Olympic track and field competition draws to a close on Saturday with Jamaica aiming to seal their sprinting supremacy.

After Bolt completed his unprecedented "double-double" of back-to-back 100m and 200m titles, the Jamaicans are targeting a possible world record as they bid to defend their 4x100m relay crown.

Bolt, who delighted the Olympic Stadium crowd on Thursday with a bravura performance in the 200m, has signalled that the Jamaicans' own world best mark of 37.04sec, set in Daegu last year, could be under threat.

"It could be a world record but you can never say because it's a relay and it's a baton so you never know," Bolt said.

"But for me, we're just going to go out there and enjoy ourselves and run as fast as possible and it will be a good race to close the show again."

The penultimate day of Olympic competition will see 32 gold medals decided, with track and field highlights including the men's 5,000m, where Britain's Mo Farah will attempt to back up his 10,000m victory, and the women's 800m.

The Somalian-born Farah admitted he had struggled to make it through his semi-final following his superb display in the 10,000m.

"My body was a bit tired and I was not as fresh for the 5km as some of the other runners," he said. "I think it showed out there. It wasn't easy out there but I managed to qualify and I'm looking forward to the final."

In the women's 800m final, Semenya will be looking to add the Olympic title to her controversial 2009 world crown.

The race will feature Semenya, defending champion Pamela Jelimo of Kenya and Russia's Mariya Savinova, looking to add Olympic gold to her world title from last year in Daegu.

Jelimo, just 18 when she won gold in Beijing, came to London looking to become the first woman to win the event twice at the Olympics.

Semenya had to undergo drug tests followed by gender tests following her magnificent victory in Berlin at the 2009 worlds, with the athlete complaining of "unwarranted and invasive scrutiny".

Elsewhere Saturday, the United States women's basketball team will attempt to preserve one of the most dominant records in Olympic competition when they meet France in the gold medal match.

The Americans are chasing a fifth consecutive title and a seventh crown in eight Olympics against the unbeaten French side.

Brazil's footballers meanwhile are targeting their first ever Olympic title in Saturday's final against Mexico at Wembley.

Brazil coach Mano Menezes insists there is no chance his players will underestimate the Mexicans as the five-time world champions look to end their long wait for Olympic gold in their first final appearance since 1988.

"I expect a very difficult final," Menezes said. "It has been 24 years since Brazil have been in the final, which shows how difficult it is to get there."

The men's hockey event will see the Netherlands aim to win their first Olympic title for 12 years when they face Germany. The Dutch are brimming with confidence after demolishing Britain 9-2 in the semi-finals.