Usain Bolt can become the first man to claim a second successive 100m-200m Olympic Games double on Thursday with the Jamaican superstar confidently predicting his own 200m world record could fall. 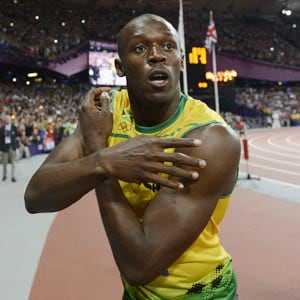 Usain Bolt can become the first man to claim a second successive 100m-200m Olympic Games double on Thursday with the Jamaican superstar confidently predicting his own 200m world record could fall.

Bolt retained his 100 metres crown on Sunday and looked to be in ominous form once again on Wednesday when he strolled to victory in his 200m semi-final, easing across the line in 20.18sec.

Victory for the 25-year-old in Thursday's final would better the record of American legend Carl Lewis, who won three golds and a silver in the sprints at the 1984 and 1988 Games.

"People always doubt the champion but I know what I can do so I never doubt myself. This is my favourite event so I am looking forward to it," said Bolt, who is targeting his own world record of 19.19sec.

"It's a possibility, definitely. I can't say but the track is fast, it's going to be a good race."

His main danger will come from compatriot and training partner Yohan Blake, who took silver in the 100m.

Also on the track, world champion David Rudisha goes for gold in the men's 800m while South Africa's Caster Semenya, in her debut Olympics, runs in the women's semi-finals.

Oscar Pistorius, the first double amputee to take part in the Olympics, takes the track for South Africa in the first round of the 4x400m relay.

The United States look to secure a one-two finish in the decathlon after Ashton Eaton led compatriot and world champion Trey Hardee by 220 points at the halfway stage of the gruelling 10-event competition.

The United States are seeking to win successive women's football titles when they tackle Japan, the team they lost against in the 2011 World Cup final, in front of 83,000 spectators at Wembley

The US struggled into the final, trailing Canada three times in the semi-finals before clinching a sensational 4-3 victory in the last minute of extra-time courtesy of an Alex Morgan header.

"For some reason we like to make things dramatic," said veteran striker Abby Wambach.

Japan are attempting to become only the second team to hold the women's World Cup and Olympic titles at the same time and striker Yuki Ogimi says their mood is better than ever.

"We have a different feeling. We are working more as a team. As for myself, I am happier than last year."

On a day when 23 golds are up for grabs, the first Olympic Games women's boxing champions will be crowned.

Australia meet the United States while Russia face France in the semi-finals of women's basketball.

The beach volleyball at Horse Guards Parade concludes with Brazil's Alison Cerutti and Emanuel Rego of Brazil facing Julius Brink and Jonas Reckermann of Germany in the men's final.

World champions Australia face defending Olympic champions Germany for a place in the men's hockey final while the Netherlands, who won all five of their preliminary round games, take on Great Britain.

The hosts are in the semi-finals for the first time since 1988.