Barring catastrophe in the semi-finals Usain Bolt will face fellow Jamaican Yohan Blake in Thursday's 200 metres final where victory would see him attain legendary status in his own eyes. 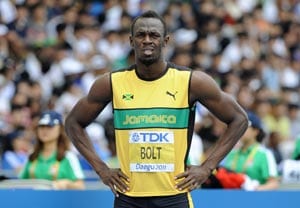 Barring catastrophe in the semi-finals Usain Bolt will face fellow Jamaican Yohan Blake in Thursday's 200 metres final where victory would see him attain legendary status in his own eyes.

The 25-year-old retained his 100 metres crown last Sunday and is now focussed on defending his 200 metres title despite the threat of training partner Blake.

Kenyan David Rudisha looks set to dominate the 800 metres in the same manner that Bolt has the sprints and the 23-year-old world record holder can confirm that by taking the Olympic title.

Rudisha said after his easy semi-final win that his mind was not focussed on anything but the title.

"I don't mind about it (breaking the world record) but my target is winning the Olympic gold medal and if the record comes that will be another great achievement."

The men's triple jump final could well be a duel between two Americans, world champion Christian Taylor and Will Claye, who is looking to turn his bronze from the long jump into gold in this event.

Taylor, who is coached by Rana Rieder who coached Dwight Phillips to the 2004 Olympic title and four world crowns, posted the best mark in qualifying of 17.21 metres but said that counted for nothing.

"I laid down a marker but everyone will have been holding something back, so I'm not going to be naive and think this means the gold is mine," said the 21-year-old.

Leevan Sands of the Bahamas may have other ideas about the final outcome as he was second in qualifying with 17.17 metres and he will be hoping to move up from the bronze medal position which he occupied in 2008.

"A lot of athletes have a good chance, but also a lot of people have a problem with the wind in the Olympic Stadium. The one who is better on that day will win the gold," said the 30-year-old.

Defending champion Barbora Spotakova will still be the woman to beat in the javelin as the 31-year-old world record holder showed in qualifying with the furthest throw of 66.19 metres.

Spotavkova, also the world champion in 2007, said that for the final she would be wearing earplugs because of the noise the crowd made - some of them from her dedicated fan club the 'Baras'.

"I will have to run fast, and I will get closer to the line to throw. Today there was a strong wind, so I had to put a lot of strength in the run.

"I just need to improve my technique. My family is coming to London to watch me, my father, brother, all of them. I definitely hope for a medal," added the Czech.