America's women smashed a sprint relay record which had stood since 1985 on Friday, as Usain Bolt's team-mates left him on the verge of yet more history at the London Olympics. 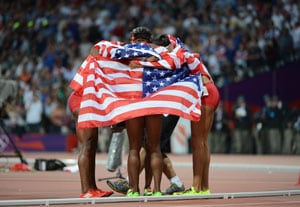 America's women smashed a sprint relay record which had stood since 1985 on Friday, as Usain Bolt's team-mates left him on the verge of yet more history at the London Olympics.

The Bahamas shocked the United States in the men's 4x400m relay, and Meseret Defar denied Ethiopian team-mate Tirunesh Dibaba a distance "double-double" when she won the 5,000m.

But America's Tianna Madison, Allyson Felix, Bianca Knight and Carmelita Jeter snatched the limelight when they sliced more than half a second off East Germany's 27-year-old 4x100m relay record, set during the drug-tainted era of the communist country's state-sponsored doping programme.

The team, including 200m champion Felix, whirred seamlessly around the track to clock 40.82sec, topped off with an electric anchor leg by Jeter, who pointed the baton at the clock as she crossed well ahead of Jamaica.

"I knew we were going to come out here and run fast -- all we had to do was get the stick around," said Jeter.

The victory pushed the United States out to a four-gold lead on the medals table, with 41 to China's 37 and only two days of competition to go. Hosts Britain are third on 25.

The Bahamas become the first team to beat the United States in the 4x400m relay final since 1972, in a stunning victory which sealed their first ever men's athletics gold.

A day after Bolt sprinted into the pantheon of Olympic legends by becoming the first man to win back-to-back 100m and 200m titles, the "double-treble" was on when his team-mates coasted into the 4x100m final.

It meant Bolt will have a chance to defend his third sprint title in Saturday's final, in a fitting culmination to an Olympic track programme which he has dominated.

"I think there's a possibility," Bolt said, when asked if he could sign off with Jamaica beating the world record of 37.10sec.

"But you can never really say it, because it's a relay and there's a baton. You never know. But for me, we're going to go out, enjoy ourselves, run as fast as possible. It would be a good way to close the show again."

Tunisia's Oussama Mellouli survived a late surge from his rivals to claim the men's 10km swimming marathon, becoming the first person to win Olympic titles in both pool and open water races following his 1,500m win in Beijing.

The Netherlands won the women's hockey final 2-0 against Argentina.

Meanwhile the United States basketball 'Dream Team' advanced to a final against Spain on Sunday with a clinical 109-83 demolition of Argentina in a lop-sided semi-final.

Spain had earlier defeated Russia 67-59 in their semi-final to set up a repeat of the 2008 final.