London 2012 Athletics: Pistorius back in, Bolt set for 200 gold history

Oscar "The Blade Runner" Pistorius and the South African relay team raised the drama stakes at the Olympic Stadium on Thursday, hours before Usain Bolt hoped to create some of his own. 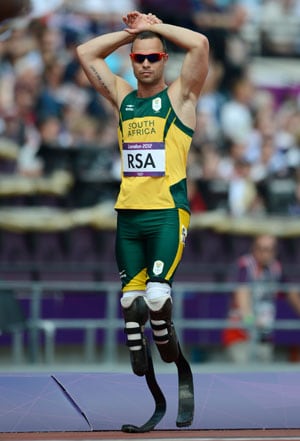 Oscar "The Blade Runner" Pistorius and the South African relay team raised the drama stakes at the Olympic Stadium on Thursday, hours before Usain Bolt hoped to create some of his own.

Double-amputee Oscar Pistorius, who runs with carbon-fiber blades, and his relay teammates were knocked out of the 4x400-meter relay following a collision during the race, then readmitted.

A jury of appeal said South Africa "had been severely damaged" in a collision between Ofentse Mogawane and Kenyan runner Vincent Kiilu, who cut across him too soon in the second section of the heat. The jury decided to give the extra ninth lane to South Africa - silver medalists at the last world championships - for Friday's final.

While other runners took off with their batons after the changeover, Pistorius glanced back to see the baton wasn't coming, and dejectedly walked off the track. It would have been his last appearance at the Olympics after failing to qualify for the 400-meter final as an individual runner.

The incident unfolded under sunny skies and a temperature of about 23 Celsius (74 Fahrenheit), certainly the best weather of the games so far.

Bolt is looking to win the 200-meter race to add to his gold in the 100. If so, he'd be the first Olympian to repeat the so-called sprint double.

Bolt won both the 100 and 200 - in world record times - in Beijing four years ago and with the 100 gold already collected, he joined Carl Lewis as the only athlete to win the race at successive games.

Training partner Yohan Blake, who beat Bolt in both the 100 and 200 at the Jamaican trials, is Bolt's main threat in the 200.

"There's a lot of people there who have come to spoil the party, so we'll see," Bolt said after cruising into the final.

"There's a possibility, definitely," he said. "I can't say (for sure), but the track is fast. It's going to be a good race."

Eva Risztov of Hungary won the women's open water race at Hyde Park, holding off American Haley Anderson in a sprint to the finish. Risztov was in front most of the way in the grueling 10-kilometer race, leading a five-woman pack that broke away from the rest of the field.

Martina Grimaldi of Italy took the bronze and world champion Keri-Anne Payne of Britain fourth, disappointing the huge British crowd that lined the banks of the Serpentine.

Eton Dorney lake west of London was the location for medals when kayakers and canoeists had four golds presented.

Later, the women's football final will have a familiar ring to it: two-time defending champion the United States plays reigning world champion Japan at Wembley in a repeat of last year's World Cup final in Frankfurt that the U.S. team lost in a penalty shootout.

"I've been hoping for this final," U.S. forward Abby Wambach said, "from the moment I stepped off the podium in Germany."

In doping news, an Olympic official familiar with the case said the IOC is set to formally strip American cyclist Tyler Hamilton of his gold from the 2004 Athens Games and reassign the medals after his admission of doping.

With the eight-year deadline approaching, the official told The Associated Press the IOC executive board will meet Friday to readjust the standings from the road race time trial. The official spoke on condition of anonymity because the decision hasn't been announced yet.

The gold will now go to retired Russian rider Viatcheslav Ekimov. American Bobby Julich will be moved up from bronze to silver, and Michael Rogers of Australia from fourth to bronze.